The Victorinox versus Wenger debate will, for the most part, go on forever. The fans of either knife realize that the fine Swiss manufacturing in the knives makes BOTH brands superior for the price. However, like Coke versus Pepsi, Arm and Hammer versus Mr. Clean, or the .45 ACP versus the 9 millimeter, the debate will likely never be fully resolved.

Okay, I probably spoke too soon. I prefer the Victorinox brand myself. They seem to be a little more solid and the Victorinox knives tend to have the tools that I really like. Of course I own many Wengers also and some of them have tools and features, such as locking blades and the snap shackle, which I absolutely love.

I have a few Wenger and Victorinox knives that are comparable in features, but I recently became the owner of a couple of knives that I just had to put through a show down.

The Victorinox Lumberjack is a hard to find knife here in the United States. I happened into one recently, and shortly thereafter, a comparable Wenger. I don’t even know the name of the Wenger and I have just taken to calling it the Wenger Lumberjack.

The Victorinox Lumberjack is an 84 mm model that features a large main blade, the combo too (can opener, bottle opener, screwdriver, and wire stripper) a wood saw and the toothpick and tweezers so common today.

The Wenger model (85 mm) features the same tools sans the toothpick and tweezers. The Wenger DOES add a corkscrew for those of us who enjoy some of the old funny grape juice from time to time.

In this photo the various tools are displayed. As you can see the two are very similar. Not the addition of the corkscrew on the Wenger.

The appeal of these two models is their compactness. For a minimalist outdoorsman’s tool they have some very handy items in a small package. I really love having a saw on my woods walking knives and these are the smallest models with a saw that one could hope to find. I am always amazed at the usefulness of the Swiss Army Knife saw.

The first order of business was an over all comparison of tools. In the accompanying photos one can see the difference in the saw, combo tool and general blade shape. I have always thought the combo tool on the Victorinox was one of the most useful items ever made. It has a lot of ability in a small package. The Wenger combo tool is very similar but one can instantly see the differing shape of the overall tool.

The blade shape has been an interesting study for me. I am a true fan of the Victorinox knife, but there is an appeal for me in the Wenger spear point blade. I have always felt that the long sweeping belly of the blade might make for a better cutting tool. I decided to test that theory and I was surprised to find no difference in the feel of one blade shape than the other. Wood, paper and some meat were used as a cutting medium and both seemed to handle the job in an identical fashion.

The most interesting part of the comparison for me was the saws. A close look revealed that the saws were vastly different in build. The Wenger had a very open toothed look with a hollow grind on the inside edge of each tooth. The Victorinox was more of a standard type wood saw with offset teeth that had a sharp triangular cross-section. The teeth on the Victorinox were also very sharp, but closer together.

I decided to make some cuts with both to test which saw would work better. After a couple of practice runs to get a feel for both I decided the best comparison would be a timed cutting from each. I had my son time 10 seconds for each saw. I used a good piece of Orange Osage clamped to my backyard work bench. As you can see in the photos, the Victorinox saw cut much deeper for the allotted time. I ran the test a few more times with similar results. I will say that the Wenger saw did not get as many particles trapped between its widely spaced saw teeth. This may make it a superior cutting tool for soft, or very moist, wood.

The Wenger saw (left photo) did not have the same “bite” as the Victorinox saw.

The cut on the far right was made by the Victorinox. The center cut was from the Wenger. The left cut was merely practice

For my last test I decided to try out the combo tools. I used a soda can to test the tools to see if one “cut” better than the other. It did not take long to find out that the Victorinox cut much better. The Wenger shape seemed to have a tendency to catch on the initial cut so it was a bit slower in cutting the same distance as the Victorinox.

I also did a quick test of the screwdriver on each combo tool and found that the Wenger was easier to spin when removing or tightening a screw. This made for a faster job. The Wenger also has the patented locking feature that is quite a neat little addition. The Wenger combo tool lacked the wire stripping feature that the Victorinox has. What does give the Victorinox a little extra ability is that it has a “half cocked” feature that allows extra leverage when turning a tough screw. Both combo tools did exceptionally well in the test. 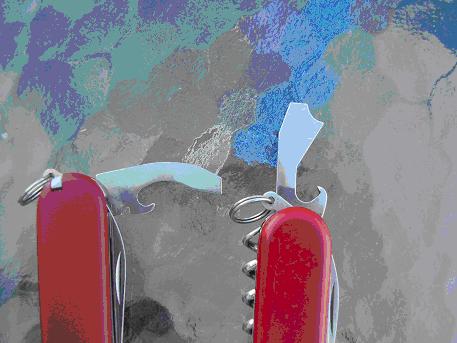 I finished up my short test in less than an hour. I had to continue giving the nod to the Victorinox due to the superior saw. I know many Wengers now have a similar saw to the Victorinox model. If it were to find its way onto this Wenger the test may have had a vastly different outcome.

If you are looking for the most size efficient tool or add to a personal survival kit, or just a good little knife to throw in your pocket, take a look at either of these. They are not the easiest to get your hands on, but I have found there were worth the extra wait.