PWork came up with another great Mod idea…scary isn’t it?
I thought the PNecker ideal was just a fluke…

The Boker shown is an old pattern made so that a “one armed man” could open it by hooking the tip of the blade on the edge of a pocket or somewhere else suitable.
The knife has a half stop and the backspring has much lighter tension than you might expect from a regular slip joint.

Boker One Armed Man and My First Victorinox Plus
Those of you who are familiar with Kathryn Kane’s book may recognize a slight similarity to the notched blade ideal shown there.

I have more than a few MFV+ (My 1st Vic plus) that had been robbed of their saws for other Mods, so I decided to give it a try...besides, Paul wouldn’t stop doing this until I did.

Because the knives I used were already disassembled, I had the opportunity to include half stops on my knives by filing small flats on the ends of the tangs.

The combo-tool rides high above the liners, so I filed a matching notch on the back for clearance. This would probably not be necessary if there was a pen blade or nail file in that position as their backs are lower.

Opening the blade is not difficult after a bit of practice, but it’s not a “Wave” mod and will never be as fast.
I’m going to use mine as PSK knives, the “one armed man “ feature might be useful if one were injured in that way. 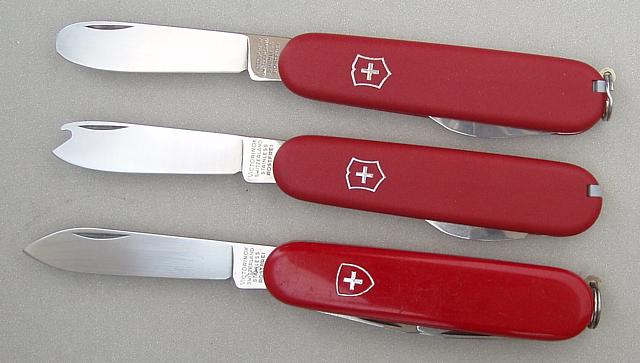 A MFV+ done this way could be called a “My First Lumberjack”...