This is an Explorer provided by Tim at Felinevet for modding. The knife was in such good shape, I could have just cleaned it up and slapped a pair of scales on it!
Inspired by the Canadian series knife that Acswan showed us, I decided to show a layer-removal mod. It is the simplest layer mod as it requires no additional parts other than perhaps a set of scales if you are not able to reuse the originals.

The rivets are center punched and the heads drilled away using a series of increasing diameter drills (three steps should be enough). Be careful not to drill deeper than necessary, as the pins will be re-used. The countersunk rivet head does not need to be removed entirely. Just enough material needs to drilled out to weaken the head, allowing it to be driven out. You should have just a conical depression left by the tips of the drills.

The knife is placed on a vise with the jaws opened enough to allow the pins to be driven out between them. Drive out the pins evenly so that it frees one layer at a time and lay out the parts in order of disassembly.

I've been using a nail set for this purpose, as the tapered tip will keep it centered in the conical depression left by the drills. The other advantage is the taper gives room for the leftover head material to fold upwards as you drive the pin out. The taper of the punch also seems to make it easier to free if you drive too deep and get bound up by a backspring.

After one or two layers have been removed, drive the pins back in the opposite direction. The drilled ends of the pins can be cleaned up and squared lightly with a file and some sandpaper. This is easier to do when still held in the knife than when the pins are completely free. Do not go overboard and shorten the pins too much. Hopefully you can see in the picture that there are still dimples left on the ends of the pins.

Notice the residue on the scales and backsprings; this is accumulated lubricant residue and other gunk, which forms a lacquer like substance. This is what causes sleepy and hard to open blades; corroded aluminum liners are another cause.

The knife completely disassembled and cleaned. Do not be tempted to stop once you get to the layer that you want to remove and begin re-assembly. Take the opportunity to clean every nook and cranny if you are working with a used knife.

I use fine steel wool to remove any hard buildup on the liners and sides of the backsprings. If there is corrosion or pitting on the liners, the steel wool will smooth and burnish without removing material, as sandpaper would.

The first layer is the hardest part; I find it easier to assemble from front to back starting with the blade layer. The main blade, backspring, corkscrew/screwdriver are put in, and then the pen blade is assembled without the spring resting on it. To hold the front end together, I use a binder-clip as shown. Pinching the liners together, I insert a screwdriver between the liners to seat the spring onto the back of the pen blade.

Assembling the remaining layers are easier, the backsprings can be completely seated before the next liner is added. A small pair of SMOOTH jawed needle-nosed pliers is helpful for manipulating the springs into place. To use, rest one side on the liner and pull the spring up until you can seat it onto the blade. Do this at the big end of the knife opposite the main blade. The long arm of the spring is easier to move, that's why I assemble from front to back. The pliers can also used to help line up the pins as you are trying to put a liner on. That's why I am stressing smooth jawed pliers; you will leave marks if you use your Leatherman or SwissTool!

The removal of the scissors layer allows the reuse of the original pins. There is enough extra length that they need to be trimmed before forming the rivet heads. If they are too long, the heads will form before they can fill the countersink, resulting in side play. The temptation will be to hammer more to tighten the joint, sometimes making the situation worse by bending the pins. File the pins down so that they protrude approximately 2/3rds the thickness of a bushing (or the thickness of the bushing minus the rim. This will look like too little material, but it isn't. Also try to keep the end square and even.

Pay attention when placing the bushings on the pins. A 91mm knife like this Explorer has smaller center bushings, with smaller diameter pins than the ones on the ends.

I do my riveting on a bench block, which is just a 1"  thick slab of cold rolled steel. To keep the knife from rocking on the rivets, I make a shim of cardboard with holes punched to accommodate the bushings.

The pin punch is used to concentrate the force of the blows when riveting. This will reduce the chance of an off-center blow from the much wider hammer face chipping the rim of a bushing. Holding the punch at a very slight angle and working in a circular pattern, peen the end into the bushing. I generally start with the center pins and alternate until the pins are just flared enough to hold the bushings in place.

Continue alternating as you hammer the pins and check the movement and side play of the blades often. When checking, apply side pressure both ways when opening and closing the blade. Stop as soon as side play is gone; don't be tempted to give it one or two last whacks just because the pin is not flush with the top of the bushing. When the fit is satisfactory, remove the excess pin stock by filing flush with the top of the bushings. Pay particular attention to this if you are going to be using stock scales. Any protruding pin stock will prevent the scales from seating flush against the liners.

On this particular knife, the pen blade had a bent tip so it was reshaped to remove most of the kink. A used pair of ruby plus scales was put on with a drop of Krazy glue in each bushing well.

I didn't have a maple leaf, so I put my Grohmann in the pic for Def. 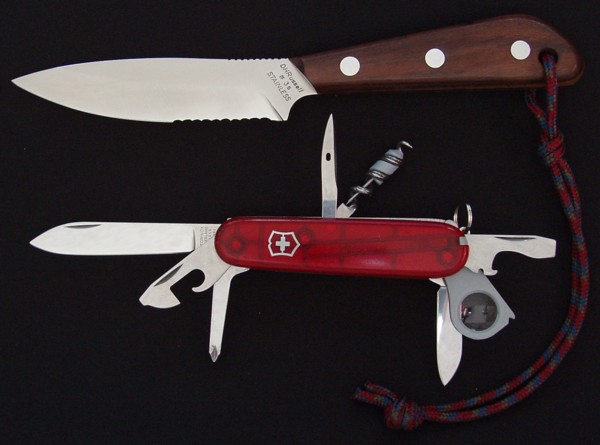 Thanks for the knife Tim!