This month’s Collection Highlight is one of the oddest SAKs you are likely to encounter.  It has no official name but many SOSAK members refer to it amusingly as “The Toilet Paper SAK.”

When I got this one a couple of years ago I wondered what the odd tool on this model was.  I couldn’t find any information on it anywhere and so I eventually posted pictures in the SOSAK forum at Knifeforums.com.  What impressed me most was not the actual function of this tool, but the fact that with all the knowledge spread amongst so many members, that no one knew what this model was for!  Speculations abounded from a tool for bindings made for an elite Swiss Ski Patrol unit to a teeny weeny toilet paper holder.  Little did we know at the time that the toilet paper joke was closer to the mark than any other!

Consisting of typical Wenger components for the most part, this fascinating 85mm two layer model also consists of a knife blade, nail file, cork screw and patented locking bottle opener/screwdriver with integrated wire stripper.  It’s a handy little knife in it’s own right, but what makes it special is the odd shaped tool opposite the bottle opener. 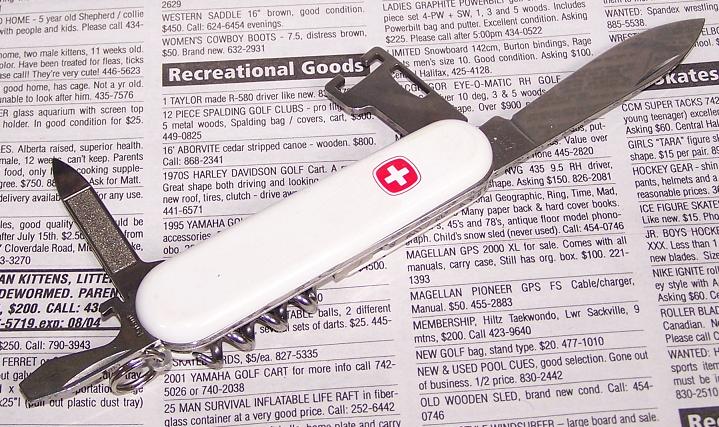 In the end I had to contact Wenger to find out what this odd little tool was for, and the results had me laughing so hard that I could barely post it in SOSAK for the other members!  It seems this model was manufactured in limited numbers (approximately 400-500) for a European company called Hygolet which specializes in janitorial services.  The odd tool is in fact a key to open the industrial paper towel holders found in many restrooms!

I suppose the elite Swiss Ski Patrol Officers have to go sometime!