We are all familiar with the new Victorinox Rescue Tool which debuted at the end of last year, and won the Knife of the Year award for 2007, but something you may not be familiar with is the two handed version of the knife, made for regions that frown on one handed opening blades.

The OH Rescue that we are familiar with differs from the two handed version in the same way that the OHT and standard Trekker differ- the OH version has the partially serrated, one handed opening main blade while the two handed version is missing the opening hole and the serrations.  This is a more sensible configuration, as you now have the option of the plain edge or the serrated belt cutter rather than duplicating the serrated blade on the OH version.  And, like the standard Trekker, the two handed blade has a half stop.  I don't much see the point of a half stop on blades, but that's a personal preference I guess.

Interestingly enough, the two handed version is still one handed opening, or at least it is for the serrated belt cutter and glass saw.  As we saw in the “Upper (one) Hand” article a few months ago the serrated belt cutter and glass saw are easily opened by catching a small lip on  a belt or seam, but either that’s not obvious enough to legislators in certain areas, or it simply doesn’t count.  One could easily understand why a two handed version would be necessary given how intimidating this knife is with it’s “tactical” type low visibility StayGlo scales and potentially lethal tweezers!

The two handed version is a difficult model to find, and also hard to get a hold of.  I had to get mine from Roger at www.swissbianco.com as he is the only dealer I am aware of that has access to them.  I have also seen them occasionally on eBay and other European dealers sites, but they are few and far between and seem to go for a fairly high price. 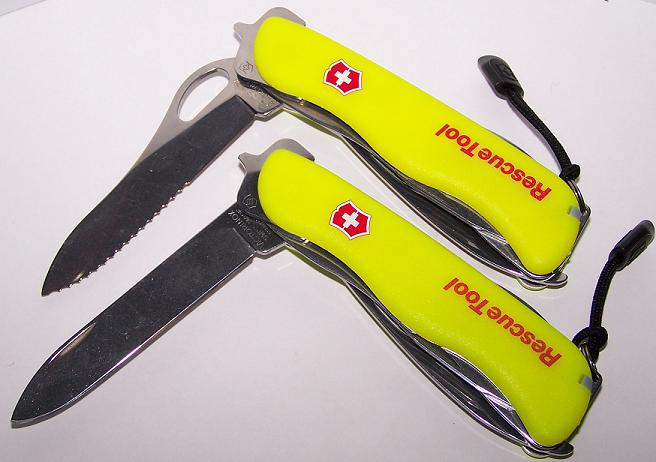 A short note on the original OH version of the Rescue Tool- there will be another version available soon if it isn’t out yet- it will have the new liner lock and opening hole, just like the new OHT discussed last month.  With any luck I’ll be reviewing the changes for that version soon enough!