Anatomy of a Custom Order

For sometime now I've thought about having a modder
build me a custom SAK.  It's not that I'm unhappy with
the stock SAKs, but part of me always thought it would
be nice to have a knife built just how I wanted it:
the exact tools that I would use regularly, and none
of the tools that I didn't want.  So always in the
back of my head I carried the idea of some day getting
a customized Swiss Army Knife.

Well the great swiss army knife spirit in the sky
finally moved me enough to contact Scibeer and I got
the ball rolling.  I knew that any knife I would EDC
would have to be build around a cybertool frame.  I
love the bit driver and all the bit heads that I can
carry on it.  For my line of work and activities, this
is really perfect.  In addition to this I wanted to
rectify what, in my mind, was always an odd thing: Why
two straight blades?  Are they really that different
that I need to sizes of a straight edge?  And so the
first major modification was this: I want two main
blades: one straight edged, one serrated.  With these
first two decisions made the basis of my knife was
laid: The CyberTool CoreDuo.

We're all aware that Victorinox has changed the tang
stamps lately on the blades.  But how often do you see
the old and new tang stamps right next to each other?

Now, I know that some people are minimalists.  I'm not
one of them.  I don't mind carrying a relatively large
knife. that said, I don't want a brick either, so I
needed to find a way to get the tools I wanted without
the knife exploding to far.  My first idea was to move
the two openers from their own layer to be the tools
opposite the main blades.  Scibeer said such an
arrangement wasn't possible though.  I knew I could
use the Combo tool against the straight blade, but I
would've missed the edge on the opener as a pry tool
for tight spots.  However, right about this time NKB
started a thread about the Watchmaker blade.  This was
perfect because this is exactly what I would've missed
in dropping the can opener.  Scibeer was able to get
his hands on one and sure enough, it was a good fight
opposing the serrated blade.  So I dropped the "opener
layer" and put a combo tool and a watchmaker blade
opposite my main blades:

My next major dilemma was whether to model the
CyberTool Lite or the CyberTool 41.  The difference,
for those not familiar with the CyberTool line, is
this: The Lite has a LED and the new style mag lens.
The 41 has a wood and metal saw.  This was a very hard
decision for me.  I didn't think I would have room for
both. that would be too big for a knife, even for me.
I wasn't wild about the LED (it isn't very bright),
but I really didn't want to give up the mag lens.
Likewise, I didn't think a wood saw would be very use
full in an urban environment (were I have 98% of the
time), but I thought a metal saw and file could serve
me well.  After a number of wasted hours on this
decision I eventually posed the question to SOSAK,
where again NKB came to me rescue.  He made the good
suggestion to keep the mag lens (and LED) and add just
the metal saw, which would be a very slight increase
in size.  Perfect!

Unfortunately, the story doesn't end there.  Frankly,
I like the old style mag lens much better for
durability sake than the new plastic lens.  But
Scibeer told me that the old lens just does not fit
against the LED.  And even though there are Victorinox
stock pictures out there showing a Cybertool Lite with
an old style mag lens, I've yet to find one out there
anywhere.  So, I eventually came to the conclusion
that I would forgo the LED, which I didn't love
anyway, in favor of the old style mag lens and an
beefy Phillips for those really big screws.

Now the good news here is that the old mag lens layer
is thinner than the LED layer, which means I had a
little extra room to play with.  I decided to add in
the fish scalar. This may seem like a very odd 'urban
tool', but it is actually a very handy took for poking
at things in small spaces.  The lack of a sharp edge
means you won't accidentally cut something, and the
forked tip makes it easy to get a good grip on even
thin things.  And while I doubt I'll even use it for
scaling, the small ruler could be useful in those
measuring emergencies.

So, rounding out the rest of the front side:

On the back side I have my cork screw plus mini
screwdriver.  Scibeer was able to fit a slightly
thinned awl into the metal saw slot, and the ever
popular parcel hook sit opposite the serrated blade.

The end result is a knife that is just a little sits,
sizewise, between the Cybertool Lite and the SwissCamp
XLT (aka CyberTool XL).

The Cybertool Lite, which I consider on the very large
edge of acceptable EDC is approx. 32 millimeters wide.
My new CyberTool CoreDuo is, unfortunately, slightly
bigger.  It sits at about 36 millimeters wide. 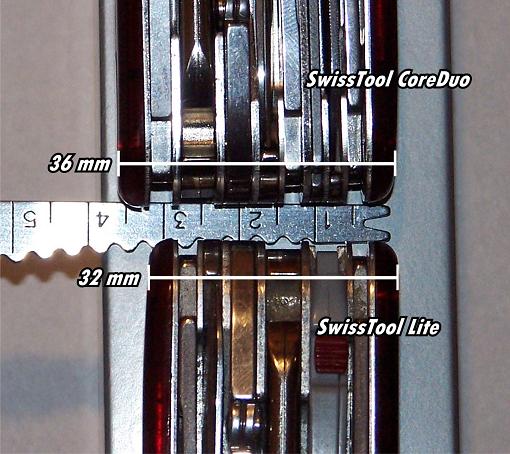 Beyond just the size difference, I can feel a definite
weight difference in my pocket too.  Not only does the
new knife have more tools, but some of the tools are
heavily than some of the old tool as well (Phillips
vs. LED).

Still, it is EDC-able in my opinion and I think I will
really enjoy the new knife.  It will obviously be very
special too me for it's uniqueness, but more so for
its perfect suitability to my needs.  Part of me feels
bad using this as an EDC.  Not only was it expensive,
but Scibeer did a fantastic job putting it together.
And as I mentioned above, where else you gonna see the
old tang stamp and the new tang stamp on the same
knife?  But this was purchased as a user knife and it
will be used.

I'd like to extend a hearty thank you to Neil (aka,
NKB) for helping me out in two places while I put this
knife together in my head.  Your ideas helped me get
sorted out exactly what was going to be in the final
product.

And of course a huge thank you to Scibeer for all his
help and his patience!  (We literally have a 5 page
personal message topic as I kept asking question after
question.)  Scibeer, you did an incredible job making
a fantastic piece for me.  I can't express my
gratitude enough for your work!

And so, there you have it. From my first idea to the
finished product. how I designed my unique knife.

[A quick note about the name: CoreDuo was the name of
a dual-processor computer chip that Intel was using a
few years back.  Being a 'CyberTool' I thought a
computer-ish name was appropriate and seeing as the
main blade is the core of any Swiss Army Knife (it is
a knife after all!) and I have dual-blades on my
knife, CoreDuo seemed like an appropriate name for
this baby.  And seeing as I paid for it and it's my
knife, I get to name, so if you don't like the name,
tough!]