When we think of knockoffs we think of the cheap junk manufactured in many developing nations- rarely do we consider “Swiss Army Style” knives from quality manufacturers, but there are some very decently made examples out there.

This model, from a German company called Dreizack is virtually indistinguishable from a Victorinox Spartan.  It is 91mm, main blade, small blade, can opener, bottle opener, awl, keyring and corkscrew.It has no toothpick or tweezers, and also bears it’s own crest, so despite it’s looks, it shouldn’t be mistaken for a Victorinox.

A quick web search shows that the Wusthof Dreizack company produces predominantly kitchen cutlery, some endorsed by noted TV chef, Emeril “BAM” Lagasse, but there’s nothing currently about any pocket knives like this one.

As I mentioned above, there are only a few keys to tell the average user that this is not a Victorinox, those being the trident on the handle (Dreizack means Trident in German) and the tang stamp which says “DREIZACK GERMANY” and also has a small trident stamp.  The average SOSAK member on the other hand, should be able to pick up on some smaller, more discrete cues- like the different shaped awl which is ground, but not sharpened, and is missing the sewing eye found on many Victorinox models.  The fit and finish is very similar, but it doesn’t have quite the same snap as a Spartan- close, but not quite. 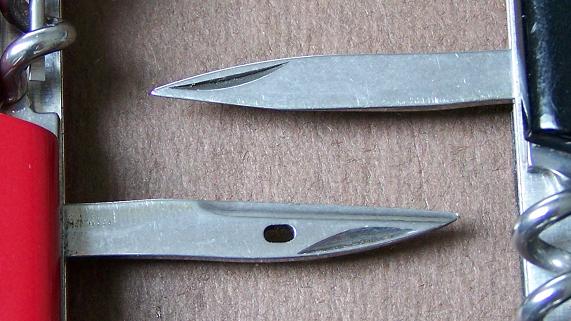 While I haven’t tried it yet, I am reasonably certain that this model is similar enough to standard 91mm SAKs that it could possibly be fitted with standard or Plus scales from Victorinox, but I like it just the way it is.  It doesn’t strike me so much as a copy as an affirmation that “great minds think alike” as German knife makers have enough excellent designs of their own that they don’t need to “steal” anyone else’s designs.  And, if we really wanted to get picky about it, wasn’t Karl Elsener originally copying the original multi bladed pocket knife design from the Germans in Solingen anyway?

This is a great knife, and a worth addition to any SAK collection!