A while back I had written what was, at the time a pretty decent article describing the various versions of the Soldier model, including the Pioneer, the DAK and the Wenger Standard Issue.  Well since there I’ve added a few more to the stable, and it’s only fair that I add them to the list.

Recently I received a KL 95 Dutch Army Knife from a generous SOSAK member in the UK (Thanks again Neil!) and it really served as the inspiration to update the Soldier Variants article.  This knife was not made by Victorinox or Wenger, and it shows.  While it may not appear different in the pictures, it is a very substandard version, and I feel sorry for the soldiers who were issued this one, especially when they see the Victorinox models carried by their peers.

The differences between the FOSCO model and the Victorinox made KL89 DAK that I have aren’t immediately apparent in pictures, but I’ll do my best to illustrate them as best as I can!  The pins on the KL 95 DAK stick out quite a bit from the scales and aren’t similar sizes on either side, leading me to believe FOSCO uses a nail type rivet with a head, so they only have to peen one side.  That is also not something they do carefully, judging by the finish on the completed pin.

About the only implement that seems to be anywhere near the same quality as the Victorinox DAK is the can opener.  I haven’t used it yet, but it seems just a notch or two below the DAK, and still perfectly serviceable.  The blade on the other hand has a definite cut where the blade grind starts, and the spine is thinner as a result, leading one to wonder how sturdy it would be during use.  Remember, these knives were meant to be issued to soldiers, whose job it is to use and abuse equipment in the field!  The spine of the KL 89 is 3mm thick at the tang/grind juncture, while the KL 95’s is only 2mm.

Overall, the fit and finish of the FOSCO brand knife is well below what I would consider to be basic military type standards.  Maybe I’m just biased towards or spoiled by Victorinox and Wenger’s fine products, but the KL 95 from FOSCO leaves no doubt in my mind that there is a solid reason behind why modern day DAKs are Victorinox!  One close look at the squared edges of the KL 95 and the protruding back springs with significantly less tension would lead me to wonder if the Dutch were trying to discourage enlistment in ‘95!

New versions of the Pioneer models were also recently re-issued in black and red anodized scales, and I figured it was important to mention them as well, especially for newer collectors that may not know the difference between the current issue and vintage red ALOX models that are in such high demand.

Most obviously, the current models feature the new shield, while the older red ALOX models have just a silver cross.  Additionally, the new models have the standard engraving plate, while the older models just have a textured surface, without the plate.  Otherwise, they are virtually identical.

Older Pioneers occasionally came with year stamps, and the speculation is that Victorinox used overstock Soldier blades with year stamps on them, and you can clearly see the 97 stamp on the older Pioneer here.  I have not seen or heard of any new Pioneers with a year stamp on them, so that is possibly another indicator.  I wouldn’t count that as the Gospel Truth however, as I haven’t inspected every Pioneer off the line! 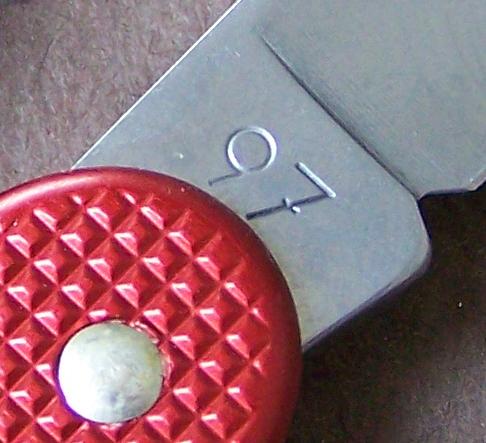 As you can see, Soldier variant collectors certainly do have their work cut out for them, and we haven’t even looked into the versions of the 1890 Soldier variants as they progressed from wood to fibre scales, versions from Victorinox or Wenger, or even the proposed 1893Collector’s model due out in September!