By now most people should know that I am not a huge fan of single bladed folders.  I realize they have their uses, so please don’t throw anything at me, at least until after you’ve read this!

We are however, now able to make an interesting comparison that really couldn’t be done before- it’s not that often that both Victorinox and Wenger release models similar enough to warrant a direct comparison, but it’s even more rare (until now, unheard of!) that both Vic and Wenger offerings could be compared to a more typical single bladed folder!

The contenders I have chosen for this three way ShowDown are the new Victorinox OH Sentinel, the Wenger Ranger 51 (with clip) and the Benchmade Pika.  These knives are similar because they are all single bladed, one handed opening folders, are similar sizes/weights, they all lock open and most importantly are all in the same price range of around $30- 40US, depending on where you buy them- The Ranger 51 is $28.00, and the OH Sentinel is $25 both available from Felinevet.  The Pika can be had at similar prices at various online dealer’s sites.

Each of these models features a one handed opening blade, opened with a hole rather than bolt, stud, disc or other method, so all three are useful for either left or right handed users.  All three blades lock open, all have polished blades, black plastic handles and lanyard holes.

The Ranger 51 and BM Pika both feature pocket clips, while the Victorinox misses out in this category.  Both pocket clips are removable using a Torx head screwdriver, and the Ranger 51 is available with or without the clip, depending on your preference.  The Wenger’s pocket clip is larger and bulkier than the Benchmade’s but is more comfortable due to it’s ergonomics- the Wenger pocket clip helps to properly orient the knife in your hand for smooth one handed opening.  The Benchmade’s clip allows the knife to ride lower in your pocket, and can also be changed to the opposite side of the handle, allowing for either right or left hand carry.  Both clips only allow for tip down carry.

Each knife’s locking mechanism is different.  The Pika uses a standard backlock system- simple and effective.  The Ranger has a liner lock system that is disengaged by pressing in the shield on the handle, while the Sentinel’s liner lock is a more standard style, needing the user to move the lock out of place with the thumb to disengage.  All lock up with a solid, re-assuring click and are reasonably safe from accidental disengagement.  Remember, any lock can fail, and any folding knife can fold- if you find yourself in a position where the lock could fail, you are likely better off with a fixed blade or safer line of work.

The OH feature on each of these blades is very similar, with the Benchmade and the Victorinox featuring similar sized oval holes, and the Wenger having a stylized hole that matches the design of the blade.  Benchmade gets extra points here for having a secondary bevel on either side of the hole for added comfort when opening- and I’ll be no one reading this thought I was going to say anything nice about the “tactical” knife!

Both the Benchmade and the Wenger blades feature jimping on the spine of the blade where it meets the handle for added security during use.  While the Pika’s jimping is more aggressive and is extended on the handle slabs, the Wenger’s is just as secure as the opening hole sticks up from the handle, acting as a stop.  The Sentinel’s blade also sticks up, acting as a stop, but as the Sentinel’s blade tip is slightly rounded, it isn’t as suitable for digging/poking as the others are and so it’s not as necessary. 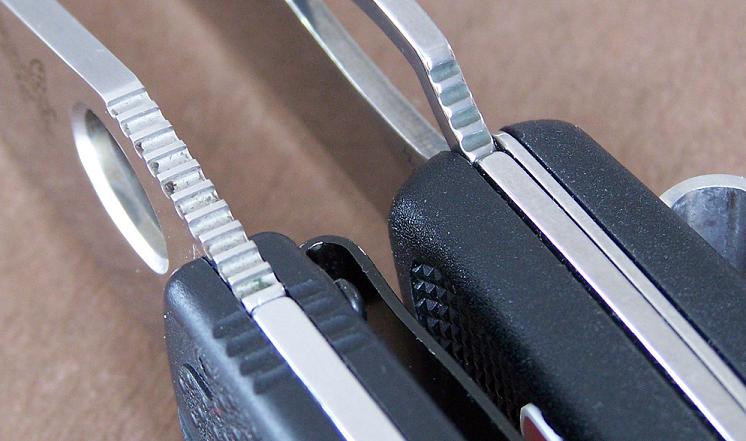 The SAK brands both feature nylon scales over aluminum liners/frame, while the Pika’s handle is one piece of molded, glass reinforced nylon, often referred to as Zytel, although that’s a brand name, and not the brand used in modern Benchmade models.  All feel quite rigid and secure in both opened and closed positions.  The Sentinel has some mild texturing common to all 111mm Victorinox models, and many of the smaller models with nylon scales.  The Ranger features Wenger’s Evolution style handled which are both ergonomically formed and also feature a cutout section with an aggressive grip pattern on both sides.  It is noteworthy that the Ranger’s clip does increase grip as well, which is important because the aggressive grip pad on that side of the knife is hidden by the clip, unless the clip is removed.  Either way, you get a good hold on the knife, which is nice as we’ve all made enough trad-offs in life!  The Pika has a knobbly texture covering the whole flat of the handle, except for the edges and the logo.  The clip, like the Wenger’s, enhances the grip, which is good because I don’t find the molded in pebbles on the rest of the handle all that great.  They are certainly functional, they just don’t instill the same level of confidence that the Wenger scales do.

Despite the similarities, each model also has it’s own individual identity and features.  The Victorinox is the most compact, and also has the standard toothpick and tweezers that many like myself have come to depend on.  It’s also the lightest at 2.54oz (71.9g) and is probably the most natural feeling model in my hand, although I do prefer the secondary bevel on the Pika, as mentioned above.  Of course the Sentinel might feel the most natural to me because I am used to carrying the OHT most often, and the Sentinel is a stripped down version of that.  The Sentinel is also the only model tested with serrations, although I believe both the Ranger 51 and Pika are available in partially serrated versions as well.

The Pika is the “middle child” at 2.83oz (80.2g), and offers a nice compromise between the features of the Ranger and Sentinel models.  It is more “tactical” looking but is suitable for every day carry and use, with a good sized blade that holds a decent edge for a reasonable amount of time.  Bear in mind though, that while the Pika is of decent quality (I have found no issues with it), it is a Red Class Benchmade, which means it is manufactured in Taiwan, which is how it has managed to stay in the same price class as the SAK models.  Benchmade has excellent quality control, and this knife should not be penalized for where it was manufactured.  One more feature that is worth mentioning is that the Pika is the only model here with an adjustable pivot pin, allowing the user to alter the tension of the blade.  This is one feature I would love to see on more knives.

Lastly the Ranger 51 weighs in as the largest of the bunch at 3.51oz (99.6g) and is also the longest, being built on Wenger’s 120mm frame.  The ergonomic scales also make it the widest of the bunch, even without the pocket clip.  It is also the most innovative of the bunch with the push button lock release, ergonomic and textured scales as well as the indentations and cutaway on the pocket clip.  There are a few drawbacks to the Ranger 51, but they are minor.  I don’t find the Ranger to be as easy/comfortable to open as the Pika or Sentinel, likely because of it’s sheer size and my fairly small hands.  Larger mitted individuals may not have this problem, so that’s something to keep in mind.  The other issue I found, and this really is nit-picking, one of the handle scales has the standard cutaway found on other Ranger models for the awl, but there is no awl on this model.  This is more a cosmetic thing than anything else and doesn’t affect the function of the knife, plus saves money by using existing parts rather than having a special run of scales for this model, but it is the kind of thing that a detail oriented SAK fan like myself would notice.

Overall, I would not hesitate to take any of these knives into the woods or keep them in my pockets for EDC.  The SAK models are more likely to be found in my pocket than the Pika simply because of the big red and white logos on them- they tend to be more socially acceptable than other brands.  To be honest though, I would still prefer to carry something with more features as I would miss the screwdrivers, pliers, saws and bottle openers found on better equipped models, but if you are a single blade kind of person, you really can’t go wrong with any of these!