For some time now I've wanted to get one of Victorinox' Canadian flag Classics- probably because I'm Canadian!  Finally, thanks to a SOSAK member pointing out an eBay auction to me, I now have one of my very own!  Sure, I probably could have ordered a brand spankin' new one somewhere, but where's the fun in that?  As mentioned in a previous article (Used SAKs) I like a model with a bit of history behind it!

The knife arrives safe and sound, and like many of the flag models, there really isn't anything exciting about it other than the flag printed on the scales.  It's a plain old Classic SD, with main blade, scissors, nail file, flathead screwdriver, toothpick, tweezers and a keyring.  While that's an impressive array of features in such a small package, it's really no more amazing than any other Classic SD, but it's still got that appeal of the Maple Leaf that tugs at my nationalistic pride- odd for something famous for being made somewhere else!

As many readers will remember from the Swiss (Made) Army Knives article a few months ago, this isn't my only Canadian Flag SAK- I also managed to get my hands on a Centurion made for the Department of National Defense a while back, and the olive drab scales make a nice match for my new Classic!

So, you may decide that you like my Canadian Flag Classic and want to know if you can get one with your own country's flag?  Well, it's very likely.  According to SAKWiki.com (which I must say is becoming very impressive very quickly thanks to some very dedicated members!) and sourced from “A Collector's Guide to 58mm Small Size Pocket Knives” by Dan Jacquart, President of the Official Victorinox Collector's Society, there are about 55 different nations represented.  You can see the list HERE. 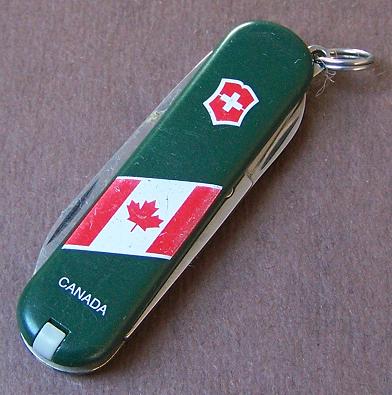 I know that SOSAK member vaswiss has a number of flag models, but I have not been pursuing this series myself.  I would love to hear from any members who have been chasing these models down, and even better, I would love to see some pics of the different ones so we can update SAKWiki.com for everyone's benefit!

Meanwhile, I'll be hanging out with my own Canadian Classic- the knife, not the drink!