Okay I guess the title was a big dramatic. But here is my observation of Leatherman’s and Wenger’s take on keychain tools, the Micra vs. Pocket Toolchest.

Both are great looking tools. One is of brushed stainless finish, while the other is glossy red cellidor. They have almost the same length, width, and thickness, and surprisingly, weight.

Both tools contain impressive array of tools for their size, here we will go through them.

First up is scissors. Both tools’ scissors are spring loaded and powered by a cam and their own backspring. Micra’s scissors is a lot bigger, so obviously it can cut heavier duty materials. PTC’s is serrated so it can grab slippery materials instead of pushing them out.

This however, is both blessing and curse. While Micra’ scissors can be sharpened by slip in a piece of sand paper on hard thin backing such as a CD, PTC’s is impossible to sharpen without destroying the serrations. Also I do not like the feel of serrated scissors when cutting things. However, due to both Micra’s handles move when using scissors, while PTC is held in palm solidly, I feel I have more control when using PTC’s scissor.

Now we come to the knife blade.

I’m going to blast every manufacturer who makes their knife blade chisel ground, and Micra did just that here. I don’t care how some people claim it’s easier to sharpen, stronger due to larger cross sectional area or whatever. It sucks as precise cutting and not easier to sharpen. Stronger? Maybe, maybe not, but I don’t ever subject my knives to enough abuse to find out.

That said, Micra sports a 1.5” clip point blade, while PTC sports a 1.5” spear point blade. They both cut adequately for their size, after reprofiling Micra’s blade to a traditional V grind.

Micra’s handles in closed position provide a quasi-safety device that prevent blade from closing on its user, but I’ve honestly never needed such a thing when using PTC.

Now what’s a keychain tool good for if you cannot groom your nails with it? Both Micra and PTC offer their user a nail file and cleaner. Micra’s nail file is rougher, but both works equally well.

One advantage Micra has thou, is that the hooked end on nail file works great for scraping firesteels, saving your knife blade from getting damaged.

Both tools offer a flat heat screwdriver as well. Micra’s is much larger than PTC’s. I’d say Micra has the advantage here, because it can handle larger screws, and smaller one as well which you’ll see later.

A eyeglass screwdriver is also standard on Micra and PTC. I tried it on mine and both work equally as well.

Beer bottles can be opened via a lot of improvised methods, but it’s nice to have something designed to do the job. Both tools offer a bottle opener, which I would imagine work equally as well. I don’t feel like to get drunk right now so I’m not going to compare them. Smiley

PTC also includes a wire/stripper bender. I can’t say how useful is it since I’ve never used it.

A tweezers is also included. I’m giving big bonus to PTC here, because its tweezers is detachable while Micra’s is attached. When using Micra’s tweezers you’ll have to deal with the whole tool’s weight slopping around, and anything on your keychain getting in the way. This is a complain for most Micra’s tool as well, that keychain will get in the way when using them. 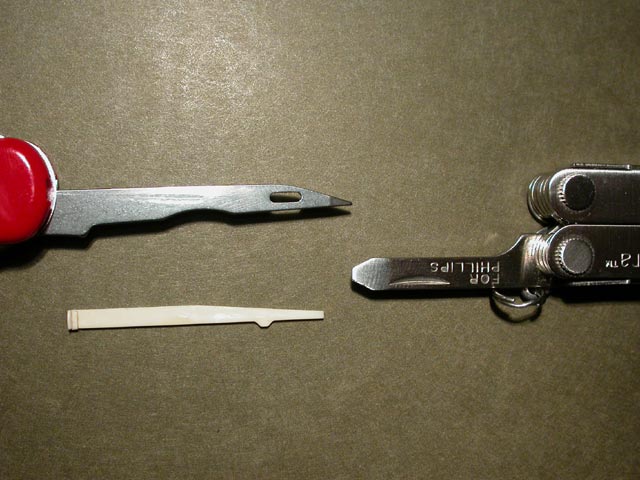 Fit and finish wise, the PTC was perfect, while Micra’s tweezers need some work to grab things reliably, and scissors need to be bent a little bit for the tip to cut.

They are both great tools with loads of feature, and you can’t go wrong with either of them. I use Micra on my keychain however, due to the stainless construction being very resistant to key damage, and I like to keep my stuff in good condition.

Either way, I think everybody should have one of these on their keychain, it can be really handy, and may even save your butt one day.