Well this time, let us take a look at a few Wenger models.

Wenger it seems has been making Swiss Army Knives almost as long as Victorinox, the company that sort of started it all. Wenger has been in the business since the late eighteen hundreds. Interestingly enough, the Swiss Army, decided to reduce this rivalry by giving each 50% of their order. This way, Victorinox can state that it was the Original Swiss Army Knife, and Wenger can proudly claim that it’s The Genuine Swiss Army Knife as both had to make their products to Swiss Army specifications.
Anyways, enough with the short history lesson. Today, we are going to look at the Wenger Traveler, and the Nail Clipper.

The Traveler is one of Wenger’s most popular full sized Swiss Army Knife models. It has 3 layers and a good collection of useful features. It fits into the 85mm lineup. The knife comes in 3 different scales. A black, a red, and stainless steel version.

The tool set is basic, but comprehensive for its size.

The most useful and most used functions that makes the Wenger Traveler a perfect Swiss Army Knife for every day carry.

Showing the Wenger name stamped into the Stainless Steel version of the Traveler.

The Wenger Traveler is a tight well functioned knife. It contains the most useful everyday tools. This is why the Traveler is one of Wenger’s most popular models. Personally I think this hits the sweet spot for the urban traveler, someone who doesn’t require a saw for bush craft.

Pros:
-   Wenger Quality.
-   Well rounded out knife.
-   Small and light.
Cons:
-   I still haven’t figured out why both Victorinox and Wenger leave the back of the nail file blank. It is like a missed opportunity going on there.
-   Some folding tools are harder to get then on a Victorinox.

Now for something completely different and unique. To the best of my knowledge, Victorinox does not have a similar knife that contains a nail clipper.

The Wenger Nail Clipper is a 65mm Swiss Army knife that is rather chunky. Chunky in the fact that it is small and fat. Extra girth was needed to shoe horn a nail clipper into those tight confines. Just looking at the nail clipper shows that quite a bit of ingenuity and engineering went into the design of this model.

The Tool set is rather good. You get a knife, file with cuticle cleaner, scissors, tweezers, toothpick, lanyard ring, and a nail clipper.

The highlight of this model is of course the nail clipper. To get the nail clipper out, you have to roll a plastic pivot point around, which engages the clippers and pops it out a little. This allows you to deploy the clippers. Easy and it works great. 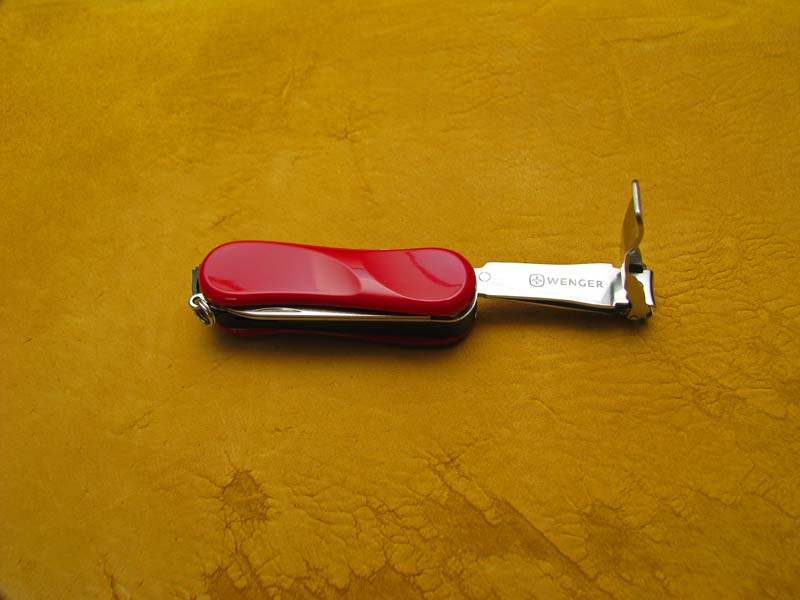 The body has the new Evo shape which aids in comfortably holding the knife. The finger grooves mold to the natural curves of the fingers making those Wenger knives that feature this style of scale, very ergonomic knives to use.

Conclusion
The nail clipper is a Wenger exclusive. I found the clippers to be a bit weak, either that or my finger nails were too thick. I also found them to be a touch too small for my liking. It certainly is a novelty. This of course brings me up to one of my pet peeves. People who do nail clippings in public. I rather find the habit disgusting for sanitary reasons…but that is just me. The Wenger Nail Clipper deserves a spot in every SAK collector due to its uniqueness and novelty.

Pros:
-   Has a nail clipper in a small package.
-   Good assortment of functions for a small knife.
Cons:
-   The nail clipper is a bit underpowered.
-   The body is rather fat. Not something you would want to toss in a jean pocket.