A couple of months ago, a SOSAK member sent me an email asking about a Wenger model that included Victorinox style toothpick and tweezers, which up until that moment, was something I knew nothing about. I started looking into this a bit more, and before I knew it, the question had shown up on the forum as well.

I'll admit that my first instinct was that this knife was a knockoff, as it's common for cheaper manufacturers to use a combination of designs in their SAK-like monstrosities, but when I saw pictures from both this SOSAK member and on the forum, it was obvious that this was no knockoff. However, the mystery went even deeper than just the toothpick and tweezers- the blade was a Victorinox style blade, the combo tool was a Victorinox style combo tool, the keyring is a Victorinox style keyring, and yet the scales bear a Wenger shield, and the blade has a Wenger stamp.

On one side it says:

It also has the infamous crossbow stamped into it.

On the opposite side of the tang it has “OFFICIER SUISSE” stamped into it, which is of course more typical of Victorinox offerings.

Very interesting, and when I asked where the SOSAK member got such a specimen, he said it was found in a local store, and part of a gift set with a wallet, and the SOSAK member graciously offered to try and obtain me a sample. Of course I jumped at the chance to get one of these oddball and curious SAKs, but unfortunately it wasn't to happen as he was unable to find one at any of the local stores. Strangely enough, a call to Felinevet also came up dry, which as anyone who has dealt with Tim knows, is a rare occasion indeed!

Meanwhile I had gotten an email back from a contact at Wenger regarding this knife, but without a significant amount of information. Wenger's rep told me that it was a one time collaboration with Victorinox, and that there were no plans to do any more. You can imagine my reaction to hearing that there was a Victorinox/Wenger hybrid out there, and no one had mentioned it to me before!

While Wenger's version of the story seems like they worked with Victorinox to develop what is in fact a rebranded Victorinox Bantam, the Elseners tell a different story- according to Charles Elsener, Wenger was unable to meet production for certain contract and had to subcontract Victorinox model to meet production. The one thing both stories agree on is that this is indeed a one time thing, so if you manage to find one I would suggest grabbing it!

I finally managed to source a couple for my own collection, and they came gift boxed with a leather Wenger tri-fold wallet. I'll probably never carry or use either the wallet or the knife- I have several non-collectible Bantams I can use, and I am not a big fan of tri fold wallets, so these will go straight into the collection. There's nothing wrong with tri fold wallets, I just prefer bi folds, although it's plain to see that this one is well made, and could provide years of faithful service if one wanted to use it. 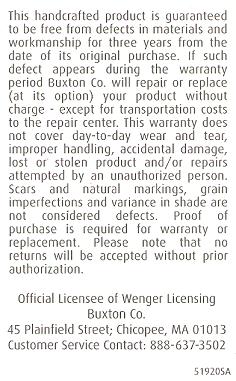 The wallet/knife combo doesn't list a name or model number for the knife itself, however another SOSAK member has managed to locate a blister packed sample which names the model as the “Premier” on eBay, and others have seen them at Sears stores, but as yet, no model number has been located to my knowledge.

It's a fantastic collectible, and I would like to take a moment to thank Gary for bringing it to my attention!