The Vintage Champion I picked up a bit ago made me start looking at some of the changes the tools have gone through over the years. Because I'm a total geek for stuff like that, I thought I'd share some of my observations and hopefully get some insight for others who like this kind of minutia as much as I do.

Warning: if this type of OCD collector stuff bores you to tears, click away now. Don't say your weren't warned.

So, first tool on my list are scissors. Looking through all my SAKs, I found 5 variants. There may be more, but if there are, I don't have them (yet :D). Note: The type names are ones I've assigned from oldest to newest for reference purposes. They have absolutely no official meaning, and can (and probably will) change.

The oldest are from my 62-68 Champion. The back tool on these is the famed "long file". These scissors are the most different for several reasons. The biggest and most obvious difference between these and modern production scissors is the screw joint instead of a rivet. This is common to all Vic scissors prior to 1993. Also, notice the ridge above the joint screw is perpendicular to the fixed blade. On newer ones, this ridge is curved.

Fourth, The spring is different. It appears to be black plain steel (not shiny stainless) and is one convex leaf that touches the moving blade near the top. I thought at first this might just be a broken wishbone shaped spring, but on those the first part of the leaf is concave. Also, wear on the moving blade indicates this is where the spring has always touched.

Finally, the position of the scissors. Not really the design of tool so much as the placement. The old Champion with these scissors is the only SAK I've seen with scissors where the scissors pivot from the same pin as the main knife blade.

These are scissors from a mid-70s Huntsman. These have no back tool. Here we see most of the features of the modern day scissors - curved ridge, wide 5mm lap joint gap, wishbone spring, and hinged from the small blade side. Notice here that the spring, while modern shape, is still black, implying mild steel vs stainless. Also, notice the oddball size of the joint screw. On these scissors only, the screw head is 2.5mm. All other versions (including the 60s Champion) have a 3.0mm screw. This appears to be the same screw from 58mm scissors.

Next come the scissors from a 86 91mm Golfer. Again, no back tool. This is the version most SAK geeks think of as the typical "pre-rivet" scissors. 3.0mm screw, curved ridge, 5mm lap joint, stainless wishbone spring riding on the flat of the moving blade handle.

This pair is an interesting "transition" pair from a 1992 Deluxe Climber. They include the spring ridge and hook back tool of the newer scissors, yet have the screw joint of the older scissors. Also note the grooved corkscrew, which typically isn't seen on knives with the hook. 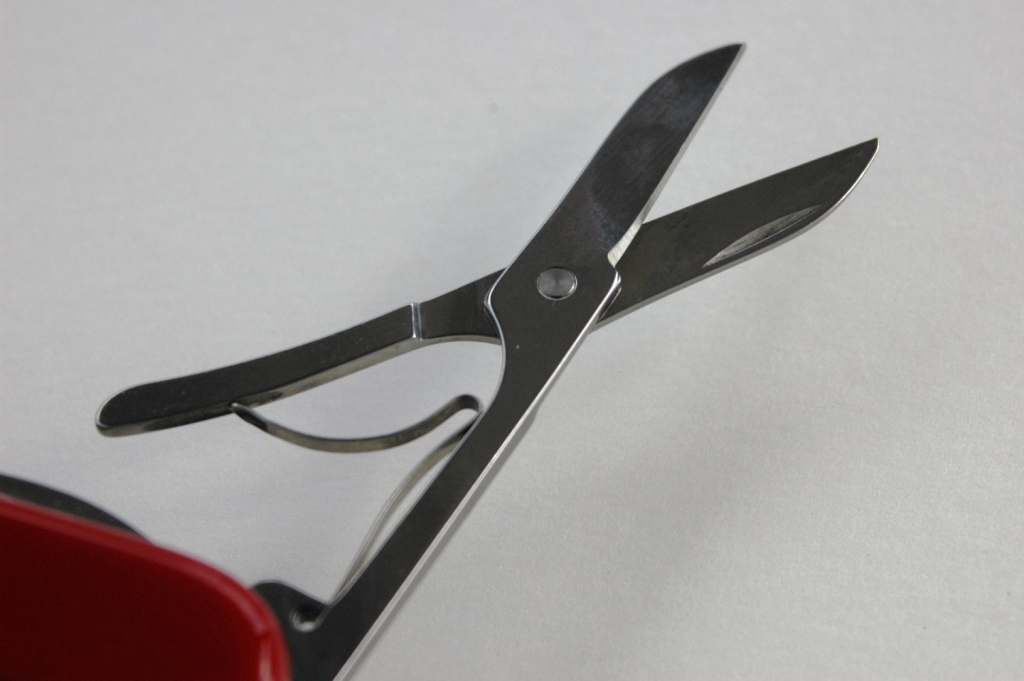 These are the scissors from my EDC Explorer, purchased new by me in 2007 (I call it a 2005 because it has a new main blade stamp and an old mag glass). These show all the features of the modern production scissors - curved ridge, rivet joint, stainless steel wishbone spring, 5mm lap joint, spring groove, and hook back tool.