One current issue model I have never owned is the venerable Cybertool- I don't know why, I have nothing against them, I just have never owned one until now.  And, I got to kill two birds with one stone by getting a 125th Jubilee Cybertool!

The Jubilee series SAKs, which also include a SwissCard, Classic and Climber come packaged in a nice presentation box held closed with magnets, and with the Vic logo and 125 Years Your Companion For Life emblazoned on the top.Opening it up reveals the knife and the 125 logo/message again.

The Cybertool 31 is a pretty well decked out knife and I can see it will be next on my list as an EDC knife or at least a standard one will, this Jubilee Edition will sit safely tucked away with the other display models I have!  In addition to the standard can opener, bottle opener, big and small blades, the Cybertool 31 also includes pliers, scissors, corkscrew, reamer, hook and a small bit driver with 4 double ended bits in it, although the end of one of the bits is a 1/8" allen key so that might be seen as cheating to some as the bits themselves are 1/8" hexagonal bits.  The other heads include three different phillips heads, a flathead and three Torx bits, all tucked in a plastic bit carrier hidden beneath the bit driver.

Naturally the Cybertool 31 also includes Plus scales which accommodate the pin and pen in addition to the toothpick and tweezers, and the eyeglass screwdriver tucked into the corkscrew adds even more ability to deal with tiny technical problems.

The Jubilee Edition is a little more pricey than the average Cybertool, but 1 125th anniversary only comes along every so often! 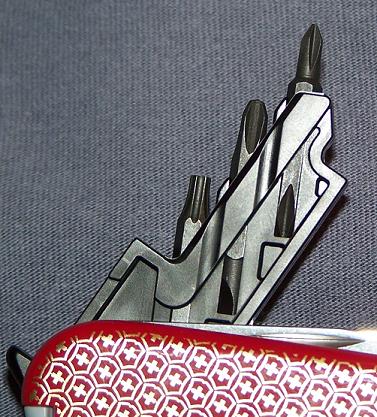