Model 51
In 1951 The Swiss Army knife was seven millimeters shorter and was made a little slimmer. The weight fell from 125g to 90g. That was a 35 g loss. The knife blade material was rust resistant and the blade was again arched. This blade design was very similar to original Model 1890. The screwdriver blade now had a notch cut into it and could be used to strip electrical cables. The rivets holding the can opener and awl are now the hollow rivet style. The diameter of the hole is about two millimeters. This hole in the knife allowed a cord to be attached. This cord on the knife became a plumb line when you needed to estimated distance for the assault Rifle Mod 57. This greatly aided in the accuracy at longer distances for the Mod 58 rifle grenades. 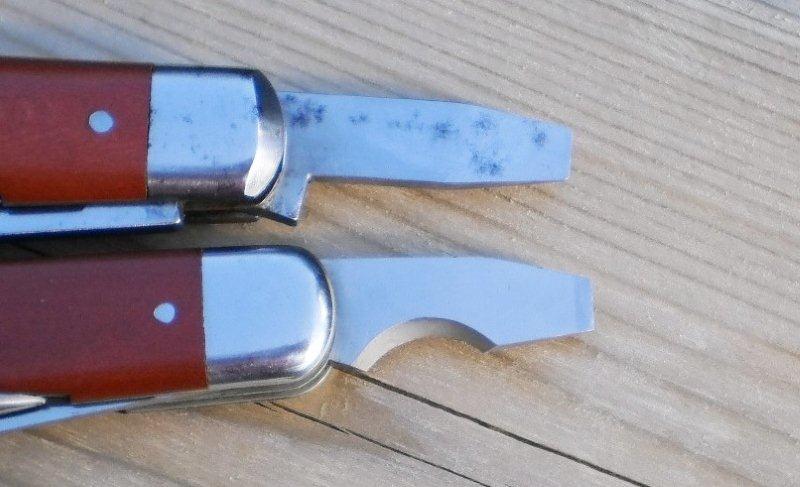 This model is exactly the same as an issued Swiss Army knife. The only difference is there is no two digit year stamp on the main blade. The capital letter “P” was stamped onto the blade where the year stamp would normally go. The hollow rivet was replaced with a solid pin. This solid pin does not move and holds the bail onto the handle.

Model 51 Variant 1
In 1954, the Model 51 changed slightly: The rivets holding the can opener and awl were reinforced better. This change made the rivets bigger.  (with a washer, 6.2 mm diameter and 1.2 mm thick).

Model 51 Variant 2
In 1957, the Wenger company was producing a new style nylon scales for the military contract knives. These soldier knives had the bright red “Grilon” grips instead for the brownish red fiber material.  Victorinox never used Grilon for their Soldier's knife. This variant #2 was made and issued to the Swiss Military right up to 1964 and possible later.

Picture the look on a new recruits face, when in 1964, waiting to be issued his new model 1961 red Alox scales soldiers knife. What does he get? A Model 1951 Variant 2 old school knife. The disappointment must have been terrible for him. BUT for us collectors, these are very hard to find. So keep your eyes open.