After toying with a ’01 Soldier for a few months, it’s now about right to do a review on this little alox bundle of goodness. It looks cool, but how does it really do? How does it work? How does it compare to that old standby, the Camillus BSA Scout? 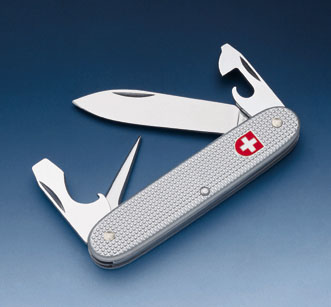 I’ll go tool-by-tool, and let them speak for themselves.  The blade is the same length and thickness as is found on the Farmer, and has an asymmetrical grind to eliminate the need for crinking.  Out of the box sharpness was good, slicing paper cleanly.  With the Scout, crinking is used, leading to a thicker overall knife.  After convexing the edge and polishing it, I was able to zip through 41 linear feet of corrugated cardboard with the Soldier.  For reference, a base Camillus Scout was able to do 30 feet. Advantage: Soldier.

The can opener is the basic Victorinox design, allowing it to be used as an effective screwdriver.  Camillus uses the Imperial-designed (patent 1944) can opener, which can only be used for opening cans.  When sitting down to make chili last night, I noticed something: the can openers work nearly identically.  I found the Camillus version easier to use on thick-walled cans, but it is useless as a screwdriver.  It’s a push- Camillus for cans, Vic for screws.  Advantage: None.

The bottle opener is nearly identical, just the same basic design.  In use, they are quite close together, but for one exception.  In my experience, when opening a standard crown bottlecap, the Scout pattern allows for a better grip due to its slightly sharper prong on the bottom.  The Vic one is well-polished and rounded, and thus does not grip quite as well.  Sure, it’s a small difference, but it breaks a tie.  Advantage: Scout.

The punch is where the Vic shines.  This punch works very well at drilling holes, drilling smooth holes in 1” thick pine with little effort.  The Camillus version has no such drilling ability in hard materials, though it can drill leather efficiently.  Older versions of the Scout knife, particularly those made before 1945, were Vic-like in design, and thus would fare better.  Advantage: Soldier.

Now, the intangibles.  Fit and finish on both knives is quite good indeed, but with one small problem.  The Soldier, for some reason, has very weak closing on the punch.  My Farmer has no such problem, but the punch on my Soldier needs regular cleaning to be able to close on its own.  The Cam has no such issue- even after years of work, my old one snaps like a bear trap.

Also, I would like to see a bail on the Soldier.  This was a feature some years ago, and it would help prevent loss.  The Camillus gets bonus points for having one, as all four-blade Scout knives do.

Overall, who wins?  Vic has the better blade and is cheaper, but the Cam has slightly better fit and finish.  So long as I have one in my pocket, I am happy.  Since the purpose of a knife is to cut, however, Vic gets the nod.  Now if only they’d make a BSA Soldier!