With regards to Paul, the original Maximum Minimalist!

Swiss Army Knives have always been recognized as being versatile gadgets with a myriad of tools to cover virtually any occasion from pooping a cork to replacing a distributor cap and rotor.  In fact, the term "Swiss Army Knife" has become synonomous with versatility.  How often do you hear the phrase "This is the Swiss Army Knife of ..." to describe a be all tool of whatever situation it is designed for?  With knives like the SwissChamp series, the ToolChest Plus series and the WorkChamp series, it's no wonder that folks think they can do just about anything at all, at any time with a Swiss Army Knife.

Of course these all purpose, ready for anything knives can really tip the scales in both cost and bulk.  I have often felt like the only thing I couldn't do with a Swisschamp is save someone from drowning, because the minute I jumped in the water, two people would need saving!

Lately I have been bitten by the minimalist bug.  I have always felt that 3 or 4 layer SAKs is pretty much the most comfortable size, with Explorers and Huntsmans (Huntsmen?) dominating my EDC, along with other greats like the OHT.

After recieving a SAK Sack from Esteban, I decided that I wanted to give a longer term review of the wonderful sheath- see how it fared in the real world for a while.  The environment where I live is exceptionally harsh and is great for really acid testing things so I felt that if the SAK Sack fared well here, then it would be perfect pretty well anywhere.  So, I needed to start carrying an ALOX model, and since Esteban also included a few braided leather lanyards, I decided I needed one with a lanyard ring, so out came the good old Victorinox KL89, the old Dutch Issue Soldier (same tools as a Pioneer, only with the year stamp engraved in the side panel) that Frank (aka Waterlander) had sent me a few months ago.

Well, I started out trying to test the sheath and figured I would "make do" with the smaller SAK since I usually carry a larger SAK or multitool in my Maxpedition bag anyways.  Of course as time went on (been a couple of weeks now) I have noticed that the best thing about this arrangement is that despite the great sheath (which still looks brand spankin new despite hard work and constant use btw) the one thing that sticks out is how rarely I have gone back for the bigger tool.  The KL89 seems to be handling almost every chore quite well.  Now I have carried Soldiers, SI's and other ALOX knives before, but not with the frequency of this one, probably because the sheath makes it so oconvenient, but now I am not certain if I can bring myself to go back to the bigger models as an EDC.  Of course, I will always have a bigger model or multitool to act as a backup, as well as my other "usual" knives, which includes a Rambler on my keychain, a SwissCard Quattro in the case for my Palm Pilot (another gadget I am rarely without!  It's the "Swiss Army Knife of computers!") and a SwissTool or Spirit in my Maxpedition bag. 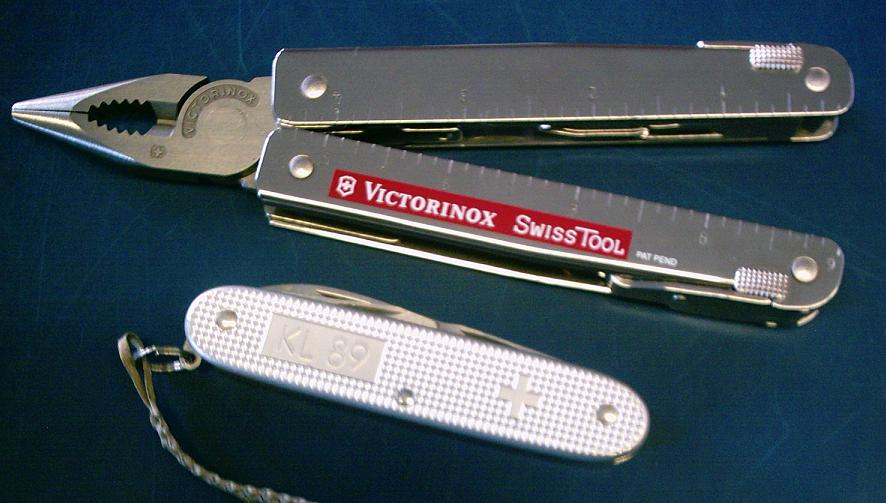 I still occasionally miss having certain tools on my person at all times, most noticeably the nail file and scissors, but they usually aren't too far away, and that's a small price to pay to stay afloat during the unforseen!
Def