Many times I am thought of or called a “knife snob” because I regularly argue the superiority of the humble Swiss Army Knife over other knife types, and the quality of Victorinox and Wenger over other manufacturers.  I don’t think it’s a case of “snobbery” so much as it’s a case of being spoiled by extremely high quality, very low prices and a history as rich and colorful as any other- and more than many.
Taking for an example, last month’s Case In Point article in which I discussed my confusion at the appeal of traditional slip joint knives.  There is much of what I wrote that would appear that I was putting down Case knives, but that was the last thing I was trying to do.  Admittedly it did come off as a “My knife is better than your knife” article, as I am certain this one will, but I just see the SAK as being a superior knife/tool in virtually every way.

Perhaps the highest quality folder I have is this Blue Native from Spyderco.  You can see how the scale and the blade are not even from the spine of the knife to the opening.
Tradition- Of course each person or group’s traditions vary, but looking at it as a whole, Victorinox is making knives in the same vein as they have made them for over the last century.  Certainly the design is changed a little here and there to accommodate cost changes, new materials and technology, different needs and so on, but the overall style and tradition of the knives are the same as they always were.  Looking at the “50 Years of Progress” article you can see that while the design changed, the essence or spirit of the knife hasn’t altered any.  To me, that’s what tradition is.

Quality- This one is a sore point amongst most people, and I think was the source for much of the scrutiny of SAK collectors and SAKs in general for the longest time.  In fact, before SOSAK, any legitimate knife discussion group, online or otherwise always looked won upon folks who tried to discuss SAKs, and I think it was mostly for this reason.  Plain and simply, a typical Victorinox or Wenger knife maintains a much higher standard of quality, fit and finish, than the majority of knives costing in the hundreds of dollars!  Don’t believe me?  See how many pieces of regular paper you can slide in between the blade and liners of a SwissChamp, then do the same thing with a Spyderco Endura, Benchmade Pinnacle or MicroTech SOCOM.  These are not considered low quality knives by anyone, but one can see the vast differences in tolerances when it comes to manufacturing.

Function- We’ve beaten this poor horse enough.  Suffice it to say that more bottles and cans are opened worldwide with SAKs than with any and all other knives combined.

Cost- Again, a topic that’s been covered over and over again.  Interestingly enough, a rare and vintage SAK that was being watched closely by many SOSAK members went for the amazing sum of $355- a colossal price for a SAK collector, but median for tactical knives, and low end for custom knives. 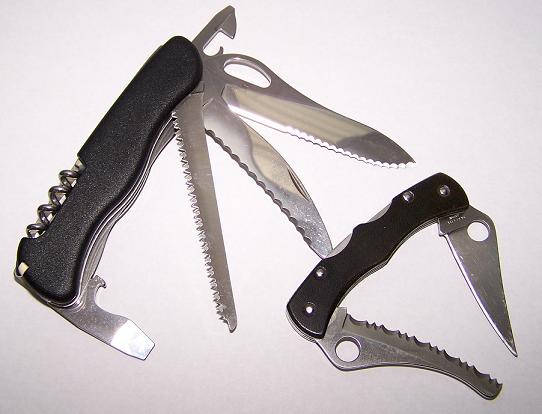 Even this Mini Dyad cannot compete with a SAK's level of function, and at half the price, the SAK is much more appealing
The interesting thing is that the very thing that collectors of modern knives rabidly search for- flawless examples of pristine limited run knives, are the stuff that every SAK comes with.  I have seen many “brand new” high end custom and production knives with small blemishes, right out of the box.  The worst I have ever seen on a brand new SAK was some scratches on the cellidor from shipping.  I have watched collectors looking to pay top dollar for a knife literally go through a dozen boxes, inspecting each and every one of them individually, comparing them with identical knives to see which one is the best.  Rest assured, when you buy a Victorinox Camper, it’s exactly the same as every other Camper on the shelf, with this shipment, and every other Camper released in the past few years.  And, since you aren’t investing your kids’ college fund in it, you don’t mind taking it out and using it.

Variants are also an interesting facet of knife collecting.  Different series or types, planned or not are always of interest to collectors, and that is another thing that SAKs have plenty of.  Limited run knives like the SwissBianco Lumberjacks, customized knives like Oupa’s kangaroo SAK or Knife Coop’s Old School SAKs, promotional knives like the annual SOSAK Knives, custom collaborations like the Urban Chameleon Waiters, discontinued knives like the Yeoman or Scientists, variations on models like the OHT or Soldier Variants, military models like my FINBATT UNDOF Champion or Dunc5's RAF knife and so on are all different directions a collection can take, and is all based on the interests of the individual collector.  Tim Colling’s fascination with serrated blades and magnifiers is a great example of this.

Disclaimer- while it appears that I am anti-Spyderco because of the pictures accompanying this article, please bear in mind that Spyderco knives were only used because that is about the only brand of non SAK knives I have left!