In the past few months I have asked members if they have had any information regarding a few oddities I have come across, and there have been a couple of members who have gone above and beyond to solve a few mysteries for everyone's benefit. The first one I want to look back on is the FOSCO DAK I showed in another update- the Soldier Variants, Part II article.  I honestly wasn't certain if there would ever be an answer to whether or not this one was ever issued or not, until Marc picked up the torch and ran with it.  You might remember Marc from his look at the REAL Dutch Issue article a few months ago.

Without further prattling on, here's what Mark found out:

I have an answer to the question about the FOSCO DAK being issued or not.


The answer from the Dutch Army Museum was not what I was expecting:


You asked the following question: question about the army knife

I am sorry to say that I do not poses enough knowledge about this specific topic to be of service to you. Neither do I have the time to deepen my knowledge of the topic.


I also sent an E-mail to Van Os Import, the company behind FOSCO. The answer was also what I was not expecting.


My I be so bold as to ask whether the Kl 95 knife (FOSCO) with part number 457015 was actually issued by the Dutch Defence department or is it a replica?


Thank you for your answer,

It is a replica.

So there is the definitive answer.


Thanks for filling in the gap there Mark!

The next little mystery I had was the FISCHER stamped ALOX model, and Josh provided this information on it:

Defender;
I read your article about the Fischer-stamped Soldier, and I found some information for you.

R.M. Fischer is a distributor in Estonia (not Lithuania, as some thought). The new company is still located in Estonia and serves all of the Baltic region. Their #1-selling product is Victorinox poxket knives. However, the knife you have is from the earlier company. Like other distributors (Victor, Kellam, etc.) they stamped their name on the tangs of some of the knives they distribute. The gold-colored anodizing you see is actually brass anodized over the aluminum handles. This makes the brass more corrosion-resistant, while doing very little for the aluminum (since aluminum doesn't tarnish much at all) except make it look nicer. This was likely done second-hand and not by Victorinox. Fischer stopped anodizing their products in 1973, but that doesn't mean that they did it. It could've been done at home or in a shop somewhere as a project. 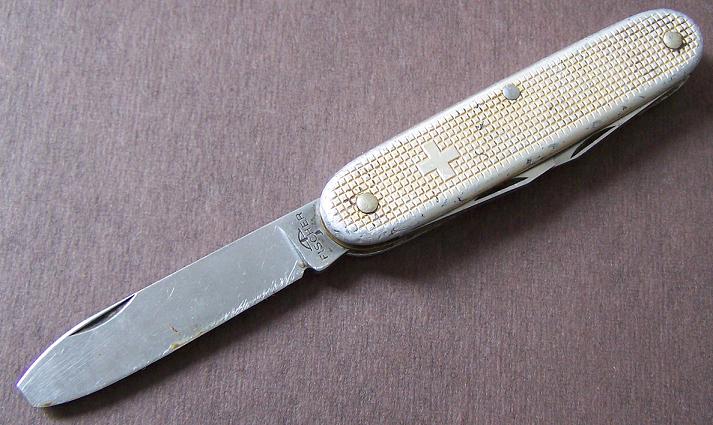 The model you have, with the rounded awl and cut-away handle scale, was made between 1966 and 1973. It sold for about $11 in 1969, and if it were in new condition, it would be worth about $110 now. That's including the brass anodizing. My source for all of this is a very nice, very old man who has enough old knife books to rival Case Cutlery. Hopefully, this has helped you in establishing where your knife is from, and what it is.

Many thanks to Mark, Josh and the "very nice, very old man" for all your help guys.  This is what is so great about SOSAK- over 2,000 enthusiasts pooling their information into one place to benefit everyone.  What could be better than that?