With Victorinox plans to re-release a version of the original Soldier's Knife, I decided to take a closer look at Wenger's release of a similar knife last year- the 1893 Heritage ReIssue knife.

While Victorinox may have started supplying the Soldier knife first, Wenger was the first to offer a reissue of the original issue knife, as seen first at the 2008 SHOT Show- I know, as I was there! And while there may have been a few slight changes to the Heritage knife between what was shown at SHOT and what actually was distributed, it is as close to the original as it can be.

Wenger's reproduction is simply gorgeous- the wood handle scales are absolutely perfect and compliment the high polished steel blades, bolsters and back springs, and the laser etched serial number is tastefully unobtrusive. The action on this knife is also amazingly smooth, without the nail breaking pressure that many of the surviving examples of the originals have.

The original plan was for these to have chestnut scales, but somewhere along the line that was changed. I can't identify the wood now used, but it is significantly lighter in color, which is nice as it shows the grain better, making for a prettier knife. And, with the high polish on the Heritage knife, it certainly is pretty!

Of course what's the good of a display piece without a good method of display? The box that the Heritage knife comes in is wood, covered in green leather encasing an insert fitted to the knife itself, and with an additional cutout for the knife's documentation. The box of course has a shield on the top, making it a beautiful centerpiece to any display cabinet. It's actually a box within a box, as there's a nice forest green fiberboard box wrapped around the wood and leather box the knife is in!

Also included in the box is a scroll like Certificate of Authenticity, which not only identifies the knife by number, but also includes a copy of the original plans and the signature of the current CEO of Wenger, Peter Hug. For those keeping track, this is the same Peter Hug that signed my IronGrip! The scroll is unfortunately too long for my scanner, but I will try to get a good shot of it up as soon as I can. Meanwhile, I have managed to get a decent enough shot of the original plan portion of it. When I saw the original at SHOT I was amazed at it- this was the actual plans, taken off a drawing board somewhere, with handwritten notes scrawled on it! Things don't come more authentic than that!

So, while this might be an expensive SAK to add to the collection, I firmly believe that no serious collector should be without one, and I'm looking forward to comparing it to Victorinox's offering when it becomes available soon! 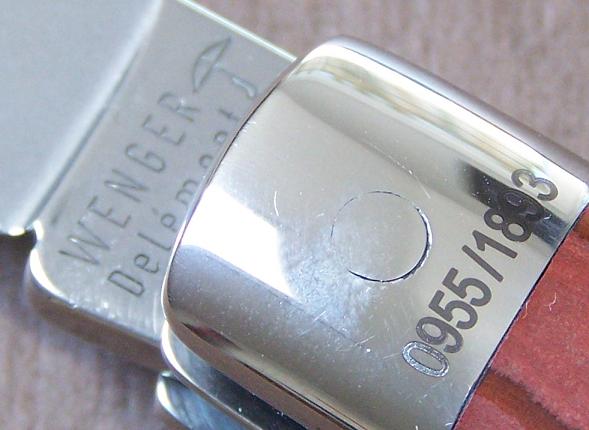