Anyone who has ever had ths misfortune of discussing flashlights with me probably has Mag Light nightmares.  Until recently, I have been a huge fan of Mag Light products, and often felt they were the best things going.  Recently however, I have been getting more and more interested in LED lights, and I have amassed enough of them to keep a large number of small children comfortable at night.  Of course, many of the “tactical” style lights that are available nowadays are expensive and take expensive batteries, two things my meager bank account doesn’t appreciate.  So, I had longed for a way to convert my precious Mag Lights to an LED format, and of course my prayers were answered (eventually!) with conversion kits from Nite Ize and Terra Lux.  I was thrilled!

To me, Mag was always the “Swiss Army Knife” of flashlights- not terribly exciting, expensive or advanced, but rock solid and dependable.  Neither have ever let me down, even when called far above and beyond the call of duty.  This of course, made me quite excited when I heard that Victorinox was issuing their own line of LED flashlights, crafted in the US by a company called Emissive Energy Corp, under license by Victorinox’s US arm, Swiss Army Brands.

It's a squeeze, but it fits!
The Victorinox also differs by having the batteries load from the “head” end, and a permanently fixed tailcap.  The Mags load from the tail end, and the tailcap (under normal circumstances) houses a spare bulb.  However, the LED conversion kits render the spare bulb useless.

All three lights operate by twisting the head.  I like switches, but they are often difficult to include on such small lights.  Still, I would prefer a “clicky” style tailcap, or at least a momentary on/off feature, like those found on larger Mags and/or other “tactical” styled flashlights.  It is worth mentioning though, that the Nite Ize kits are available with an optional tailcap replacement which includes a switch, but I don’t have that so I can’t really comment on it’s effectiveness.

Tailcaps- the Vic lanyard hole is integrated into the black ring on the end.
Each light also has a lanyard hole on the tail end, which is a very handy feature, but I find sometimes loosens the removable tailcap on the Mini Mags.  This is not a huge concern, but is worth mentioning.

You can easily see the difference in reflector cups.
The Nite Ize kit replaces the standard bulb easily, and also replaces the reflector cup with one large enough to accommodate the three LED’s, which take up a substantial amount more real estate than the original bulb.  The Terra Lux kit also uses it’s own reflector cup, even though the single LED doesn’t take up much more space than the original incandescent bulb.  Most importantly, the Terra Lux kit also retains the beam adjustability feature, and is the only one of the three.  The Victorinox light doesn’t have an adjustable beam and the LED is hardwired in since it is not a conversion kit, but issued from the factory like that.

Note the 3 LED's in the Nite Ize kit, versus one LED in the other lights
On paper, the Victorinox is also mildly more expensive at about $30, while the Mini Mag sells for about $10-15 and about that again for the conversion kits.  I don’t feel that the cost difference is significant, especially since you could pay the same or more for the Mini Mags and conversions, depending on where you get them, as well as the effort (minimal though it is) in actually performing the conversion.  The Victorinox is ready right out of the box... well after you install the included batteries right out of the box too!

The Nite Ize didn't fare so well in the beamshot test.
Each light performed adequately, and I have used each of them in an area of the local park where I walk my dog after dark, and I have not been disapointed in any of them.  As you can see from the following beamshot however, the Victorinox is visibly the brightest, followed by the Terra Lux kit, and in last place is the Nite Ize kit with three LED’s!  This was quite a shock to me as I thought that with three LED’s, the Nite Ize would lead the pack.  The beamshot test I feel is significant, but one has to remember that the Victorinox and Terra Lux are focused beams while the Nite Ize is more of a flood.  Additionally, I found that all three functioned adequately in the field, with no noticeable difference in actual working conditions.

All in all, each of the three lights is well worth the money, although I feel that the Victorinox excels just above the others, due to the brightest light and the convenience of not having to purchase a separate conversion kit, then assemble it yourself.  The Terra Lux comes in second place since it had the second brightest beam, and gets extra marks since it is tyhe only one that is adjustable.  That is a great feature, and one that has made Mag Lites top of the heap for so long.  Lastly, and there is no shame in being last on this list- all lights were impressive- I would suggest the Nite Ize kit, especially if you are a fan of having an actual switch.  As I mentioned before, I can’t comment on the switch itself, but if you positively must have one, the Nite Ize kit is the only one that has it available. 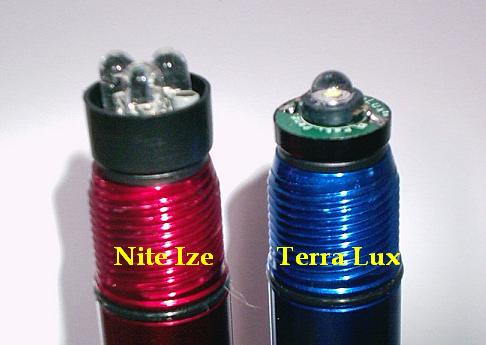 The two Mags in "Candle Mode."  Batteries removed for this pic!
One additional feature of the Mag Lites is their ability to function in “Candle Mode.”  The Victorinox does not do this, and the conversion kits do not affect this feature.  Of course, with the extreme brightness of the LED bulbs, you want to make certain that you don’t look directly at it!  Trust me, it’s not fun!  This of course, can make it difficult to turn off, but since LED’s don’t heat up like incandescent bulbs do, you probably won’t burn thr tent down if you knock it over while camping!

I can certainly say that I am glad to have all three of these lights available when I walk my dog or the power goes out!

If you are interested in trying out this, or any other Victorinox light, please see them in Felinevet's Shop!