My first knife was a Swiss Army Knife that my grandfather gave to me.  Although the knife was lost long ago, I will never forget my astonishment as I opened and closed each tool, wondering about the function and marveling at the design.  Many of you probably had similar childhood experiences.

For the most part, Victorinox knives still look much like the knife I received from my grandfather when I was a child.  Although Victorinox follows traditional patterns (if it ain’t broke don’t fix it), they continue to innovate and have introduced new tools (e.g. SwissTools) and integrated new implements and technologies into their Swiss Army Knives (e.g. SwissBit).

On a recent trip to an outfitter store, I bought a Victorinox Spartan Lite (Model # 53451).  The Spartan Lite builds on the original Spartan, the most popular full size Swiss Army Knife.

The Spartan Lite adds a LED light, a Phillips screwdriver, and a mini-screwdriver to the Spartan pattern.

Like many of you, I was fond of the original Spartan pattern—it was small enough to go unnoticed in a pocket but contained many of the most essential tools… except a proper Phillips screwdriver.

The 3-layer Spartan Lite is the thinnest current production Swiss Army Knife to use this style of Phillips driver  The thinner 2-layer Scientist had a similar driver but the pattern is discontinued and somewhat rare.

The head of the Phillips driver is different than the driver on traditional patterns.  Not quite a standard #1 or #2 Phillips, it is unique.

Letting no space go to waste, Victorinox also incorporated a mini-screwdriver that is stored in the corkscrew.  The design is pure genius and works well for the small screws found on eyeglasses and electronic cases.

The LED light (or is it lite?) is somewhat of a disappointment.  The light is quite dim compared to keychain-type LED lights.  But it provides sufficient illumination of nearby objects (key holes, etc.).

The light is actuated by either pushing a red switch for momentary operation or sliding the switch to lock the light in the ON position.  The light uses two 3V lithium CR1225 watch batteries which are included.  The battery compartment swings out of the handle and the door of the battery compartment unsnaps without requiring any tools. 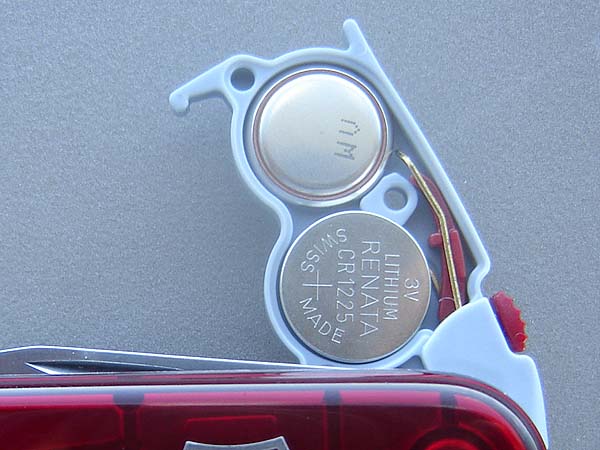 The knife blades and other implements are typical Victorinox quality and I don’t think it’s necessary to comment on them.

This review is adapted from a discussion thread originating on Multitool.org.  Additional Spartan Lite information is available here.