The Rescue Tool is perhaps the most innovative SAK to have come along in quite some time.  Victorinox, well known for their traditional designs really broke the mold and took most folks by surprise when this one came out.

While the Rescue Tool does feature some standard Victorinox tools (notably the partially serrated one handed opening blade made famous on the OHT model, the bottle opener/wire stripper/screwdriver, the rear mounted phillips driver and awl) the Rescue Tool incorporates some new tools, and some radically new designs.

The Rescue Tool and the plain edged OHT
Most obvious is the color.  The scales are Victorinox’s StayGlo type scales, although this is the first time they have been made available in the 111mm format, which is something that many StayGlo enthusiasts have been waiting for for a long time.  The scales are well in keeping with the rescue theme of the knife and are extremely noticeable in the light or dark.

The sheath that accompanies the Rescue Tool is also worthy of note- normally I would mention the sheath last as it is often an interchangeable addition to a knife, but this one is such a radical departure from the standard Victorinox sheaths that it bears more than a basic mention.  The sheath is constructed of red nylon and features yellow piping, again in keeping with the emergency service type design of the tool.  The belt loop is also significantly bigger, most likely to accommodate larger belts worn by fire and other rescue personnel.  I will state though, that while the sheath is designed for emergency work, it doesn’t transfer well to the civilian market as it is very bright, and looks best suited to Ronald McDonald’s costume rather than a pair of jeans.  Of course, this SAK was meant to stand out, and does a great job of that.  I only mention this because if this appears to be a model you would like to EDC, you may want to consider purchasing a standard Victorinox sheath.

Perhaps the next most striking (no pun intended) feature is the glass break.  This looks like (and is!) a sizeable hunk of metal stuck to the end of the knife.  At the time of this writing, I haven’t managed to test it on any glass and so I cannot say how effective it is with any certainty.  I have however used many different glassbreaks in the past, both spring loaded and otherwise, and I will say that this one feels just as sturdy as any others. Plus, it saves me from using the lanyard ring on my SAK for breaking glass, a habit that has ruined many rings for me in the past!  All one needs to really do the job is a decent unsharpened point to penetrate one spot of the glass, and the rest just splinters and falls away.  The first thing that occurred to me when I saw the glass break implement was that it seemed like it might be awkward to use the one handed opening feature of the main blade as a result.  There are two good points for those of you who might feel the same way- it isn’t as awkward as it seems (and I have fairly small hands- larger hands may not even notice it at all) and the second is that it is removeable.  Simply grab it with a set of pliers and pull and the glass break comes away from the rest of the knife instantly with no trouble.

One thing that surprised me about the Rescue Tool is the seatbelt cutter.  One would of course assume that no rescue tool is complete without some way of cutting a victim free of a seatbelt, and so it’s inclusion isn’t terribly surprising, but the design of it is.  Again, Victorinox has always been very traditional in their designs, and has always tried to use existing components to manufacture new knives, presumably to help keep costs down.  That is not the case with this one!  The seatbelt cutter is slightly different from the one found on the Fireman model.  I don’t know for sure to what benefit, but Victorinox must have their reasons for changing it. 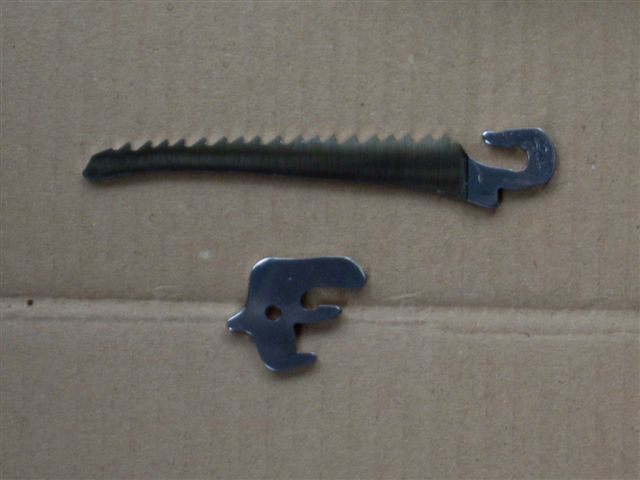 Lastly, we come to perhaps the most innovative new design of all- the glass saw.  This is a fascinating idea, and I am impressed.  Much like the glass break, I haven’t had the chance to test it out, but the design of the tool, plus the inclusion of it (who would consider a specialized glass saw?) is simply amazing.  And, that’s not the best part.  For the first time, Victorinox has designed a removable tool!  Now, whether this is to allow for replacement saws in the event one breaks or dulls, or whether it is to allow for interchangeable tools in the future I don’t know, but I am still excited by the prospect.  I can’t think of any other tools in particular that this knife could benefit from, but now that they have the design it can easily be reproduced on other models.

One other simple thing that makes a huge difference is the lanyard.  This model not only comes with a lanyard ring, but also a short lanyard with a small Victorinox fob on the end, making it not only easier to grab and hold while wearing gloves, but also makes it easier to orient in your hand when your eyes are busy elsewhere.  It’s a small thing, but as usual, Victorinox is paying close attention to the details!

This is an excellent SAK, with only one real drawback to EDC as mentioned above- the sheath.  And since that is easily solved, this one comes highly recommended for those who spend a lot of time outdoors or on the road.  I wish I had one when I used to work patrol duties.  I have been the first person on the scene of an accident on many occasions, and while few were life threatening, many would have been made easier to deal with, at least in part, with the Rescue Tool.  I hope this is merely the first in a whole new generation of knives from Victorinox as it is a very exciting direction, both from a functional and a design perspective.