Battle of the Bottles

Battle of the Bottles...  and some considerations on a one-of-a-kind knife.

Within days, on February 17, my loyal OHT and I will be turning a year of excellent relationship, and I want to celebrate it by sharing some feelings with my friends of the SOSAK.

The author at work with his new best friend

Throughout these twelve months of persistent use —I constantly carry this inseparable tool— I have arrived to the conclusion that this is the knife for the following reasons:

1. The OHT cuts everything the blade of a knife can cut, and its slightly serrated edge still dares to do more:
A few days after I bought it, I was at the street riding my bike when one of my shoe-laces got entangled with a pedal. If I hadn’t had my OHT ready, I don’t know what could have happened. Can you imagine me, lying on the street, with the bike crushed on my side, desperately trying to release my foot with just one hand? In no time not only a bike would have squashed me… But one of my favorite mottos is “It’s better to have it and not need it, than to need it and not have it”. In a twinkle, the blockade blade of the OHT cut the knot and I managed to move away from the traffic, without any injury. What I did next? I bought my wife and daughters their own OHTs., which they proudly use, both at home "to cook and to garden" and at the club.

2. It is known that knives with serrated edges get dull only after a lot of use. But I like to have my OHT perfectly ready to come into action at any time, so whenever I use it, I verify the state of the edge, and if it needs to be recovered I do whatever it takes to recover it. It’s absolutely simple: the steel of the OHT answers immediately to the regular methods (and to those not so regular too).

3. Its compact size of 111 perfectly “carriable” millimeters and its multiple functions turn it into the paramount tactical and survival knife. I can’t ask a “real knife” to saw a stem or a plank, to drive in any kind of screws (its point would break), to clean my teeth (it would be too painful), to remove a thorn from my finger (I don’t even want to imagine it), to open a round hole in my belt, to strip a cable or an orange, to open a soda or a tin of pate. But, for sure, I can ask my OHT to perform all those things. Even if we speak of an urban attack, the OHT, when closed, becomes an element of defense, as it immediately improvises a consistent yawara stick.

4. Speaking of the handsaw, I have compared the OHT’s to that kind of toothed  surface that certain survival “real knives” have at the back: the TAK’s toothed edge is practically “just for watching”; it might saw, but after a huge effort. On the other hand, the OHT’s handsaw is invincible thanks to the way in which its toothed edge is arranged; it makes me think of the jaw of a cunning shark. Of a fast shark. Besides, the size of the OHT´s handsaw is similar to the ones which come at the back of several models you can find at cutleries nowadays; but I know I could never be able to disguise a “Rambo style” knife in one of my pockets, or walk along the street with such a monster clinging to my belt, as I actually do with my secretly concealed OHT. Furthermore, the OHT’s general size makes its handsaw much easier to use in those places where a big tool finds it difficult to access (a thick grove, for example). 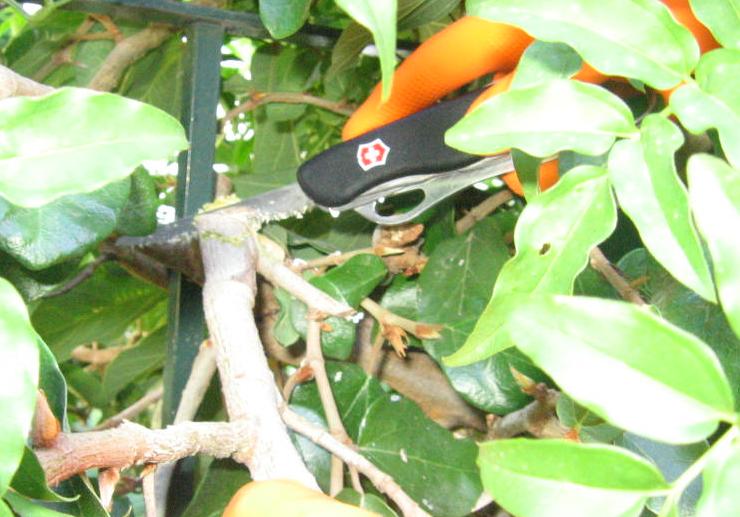 5. But there is something else about the OHT, its use for sport: this confirms what Casey Campbell opportunely says in his review about this jewel’s military version: “There's virtually nothing you'll need a knife to do that this knife won't do”. Can this small great hero perform well in highly demanding cut competitions? If you will allow me, I’ll invite you to watch the videos, and arrive to your own conclusions. They will speak for me. I thank my daughter Marina who, with a very good visual sense, filmed us both my OHT and me. (Link to the videos)

Cutting With a SAK 1


Cutting With a SAK 2

In short, if you travel to any region of the world or if you want to dazzle your friends at an “asado” —it is our habit in my beloved Argentina to have “asado” every Sunday—, the OHT is indeed the perfect knife.