This being (adapted from a thread on) MultiTool.org I thought I would look a one of the most versatile tools to be found on a SAK, the Victorinox Combo tool.  The Combo tool is found mainly on the smaller 84mm knives with the Compact being the only current 91mm knife to carry the tool.  It notably features on two of the more desirable out of production knives the Scientist and the Yeoman.

So what can this tool do for us?  First and foremost it acts as both can and bottle opener.  As a can opener it doesn’t quite match up to the excellent dedicated can opener that features on most Victorinox knives but it is more than able to do the job and, lets be honest, how many of us need to use our SAKs to open a can of beans these days?  As a bottle opener I find it better than the standard Vic tool.  To my mind the hooking arm gains a much better grip on the underside of the cap and is far less likely to slip. 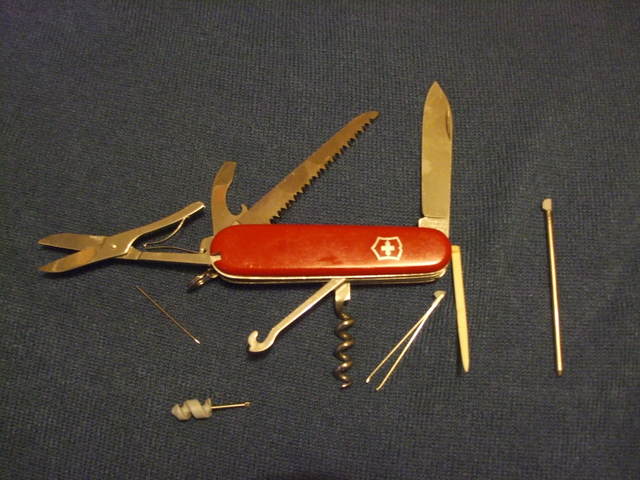 There is more I hear you gasp?  Yes there is.  Also featured on this is the wire stripping/bending notch.  Not a feature I ever use myself but as it only adds to the feature list I’m not complaining.  Lastly we come to the screwdriver tip.  This is sized somewhere between the two sizes found on most other SAKs and is about the right size to fit a No4 or No6 slotted screw.  Now one of the features most loved about the Vic can opener is the small flat driver that also works very well on Phillips and Pozidrive screws.  Not many would want to give that option up.  Happily you don’t have to as the Combo tool also fills this role.  I admit that it is a more tricky operation as you have to hold the knife at 45 deg and insert the point into the screw head but in an emergence it can be done.

In fairness I will add some of the drawbacks to the Combo tool.  Because it replaces the small blade it is noticeable thinner than the other openers and so is weaker than the cap lifter and so not so sturdy as a prying tool.   Also by losing the opener layer you also lose the awl that is mounted on the back.  The biggest advantage to the Combo tool however is the fact that it allows for a SAK that is a layer thinner and so makes for a knife that is that bit more pocket friendly.  All in all it strikes me as one of the most versatile tools to be found and it is a shame it doesn’t feature on more knives.