Okay, I admit it, I have a problem.  I like to use a SAK every chance I get, whether it's the best tool to use or not.  Maybe it's an attempt to justify the extensive collection I have, or prove to those around me that a SAK is the handiest thing going, but for whatever reason, it's always the first tool I reach for, wherever I am.  Even in the kitchen I usually open cans with my SAK as after all these years I've yet to master an electric can opener, and finding a manual can opener in a drawer full of various kitchen utensils and gadgets can be a pain.

That explains the myriad of bottle and can opening SAKtivity pictures I post, as well as many of the other oddball pics, but when do you get to the point where a SAK just isn't enough?  Well, this hit me right on the nose recently, and I decided to forgo my trusty SwissTool in favor of my hacksaw, last seen in the Wood Saw Shootout.

It all started with another conundrum of mine- I bought a 48” jack for my Jeep after failing utterly to use the tiny bottle jack included with it.  Now anyone who has or has even been in a Jeep Wrangler knows that there is a very limited amount of cargo space inside, meaning that carrying extras like a large, bulky jack is a difficult proposition.  Many folks have had this problem, judging by the large number of different solutions out there- special mounting brackets for the front and back bumpers, special hood mounts, bags, hardshell cases and so on.  My solution was to stand it up in what passes for a trunk, secured to the roll bar with either nylon straps or bungee cords.  The problem was the 48” jack with 1” base was 49” high, and I had all of 44” of height between the floor of the truck and my amazingly fragile rag top, so I decided to cut my 48” jack into a 42” jack, feeling that the loss of 6 inches wouldn't be too detrimental- especially when looking at the alternative, which is leaving the darn thing in the closet and no having it when I needed it. 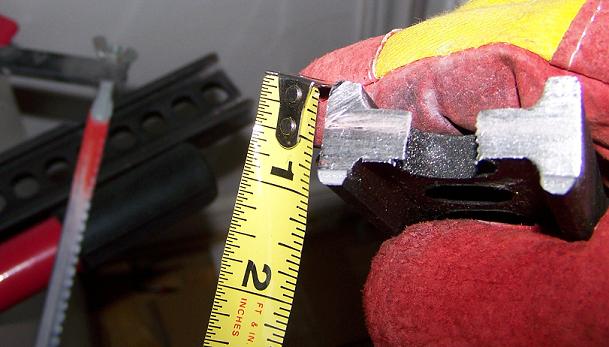 So, out comes the measuring tape, and a marking pen, and with 42” marked off, I started the unkindest cut of all.  I'm sure a lot of the 4x4 guys out there are cringing at the idea of cutting off a HiLift, but it has to be done- just not, as I quickly found out, with a SwissTool.  It only took a minute and a few strokes to decide that the ergonomics and cutting edge of the SwissTool were just not up to the task- not when there was a very good alternative less than ten feet away.  Now, had I been in the field and needed to cut a large, heavy piece of steel and all I had was the SwissTool, I'd have done it and been proud of the accomplishment, but since there's an actual hacksaw with a metal cutting blade already in it, well even I am not that dense!

Long story short, I now have the jack in my Jeep for when I need it, and the SwissTool is ready for the next job... and my arm is still attached and ready to use it next time!