Rescue Review From A Rescue Worker

I was driving home from work Thursday afternoon when a friend phoned me up to tell me there had been a very bad car crash on the main road into my village, I thanked him and said I would alter my route. After hanging up my phone rang again from another friend telling that the school buses couldn’t get through and had been diverted. I then phoned my wife to make sure my girls had got home safe and she had told me the police had taken them off the bus and walked them across a field and around the accident. 3 fire engines , 3 ambulances , 1 air ambulance and more police cars then you could shake a truncheon at .The road was blocked all afternoon but I understand no one was killed but a woman was very badly injured and had to be cut free .
The roads in and out of my village have deep drainage ditches either side of them and in past winters I've seen more then a couple of cars in them . About 3 years ago a 20 year old man drowned in one after loosing control of his car and ending upside down .Despite other cars being at the scene they couldn’t save him .

Friday I started to think about the events from the previous afternoon and decided it was time for a dedicated rescue tool. I know I carry a multitool and I'm sure I could get by with it but this would help put my mind at rest. I then remembered Neil ( NKB ) had a Victorinox Rescue Tool for sale. So then started a flurry of PM's via my mobile phone while I was meant to be working. He still had it and a deal was struck and he posted it that afternoon and I received it the next day.

The Vic Rescue tool has now been about long enough for people to realise its a serious purpose built tool.  Based on Vics 111mm chassis and using a one handed Trekker blade for its main blade .It also shares the same locking cap lifter/screwdriver / crate opener, awl and Philips driver with the other 111mm range .So what makes this a rescue tool?

Well let’s start with the window breaker. This protrudes out the front of the knife and is used as an impact tool on side or rear car windows to break the toughened glass. Its also use to punch holes in the laminated windscreens to enable the saw to be introduced .This tool can be pulled out and replaced if it’s ever used. 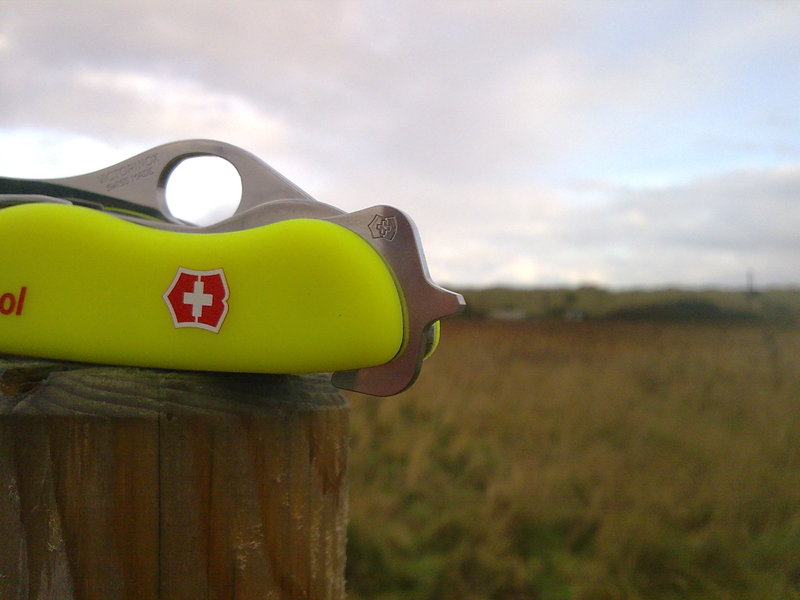 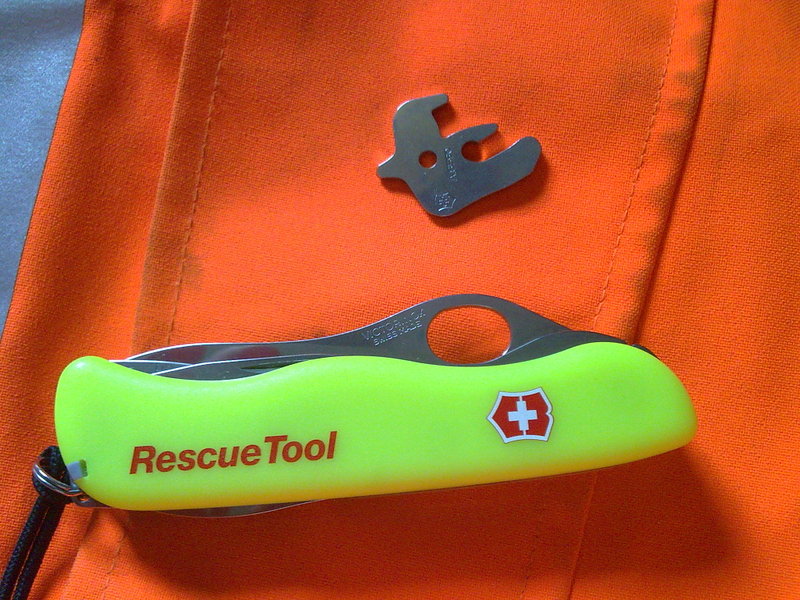 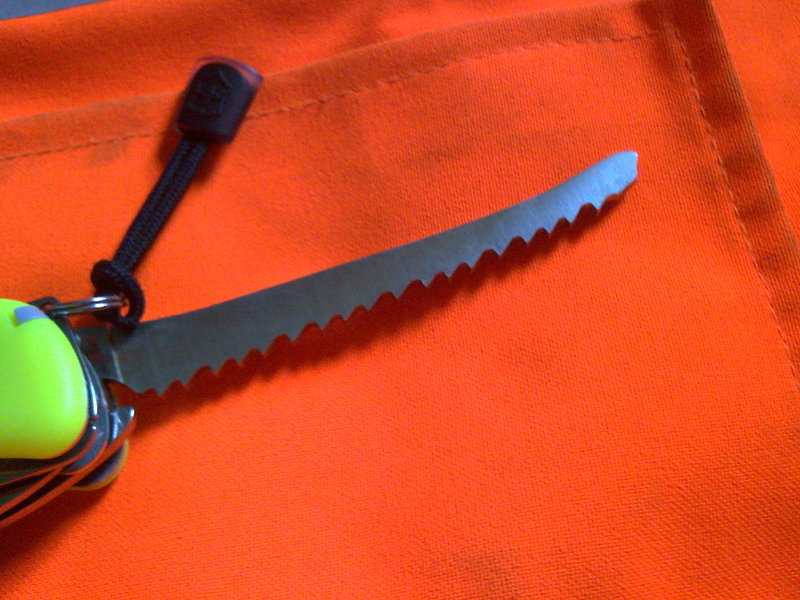 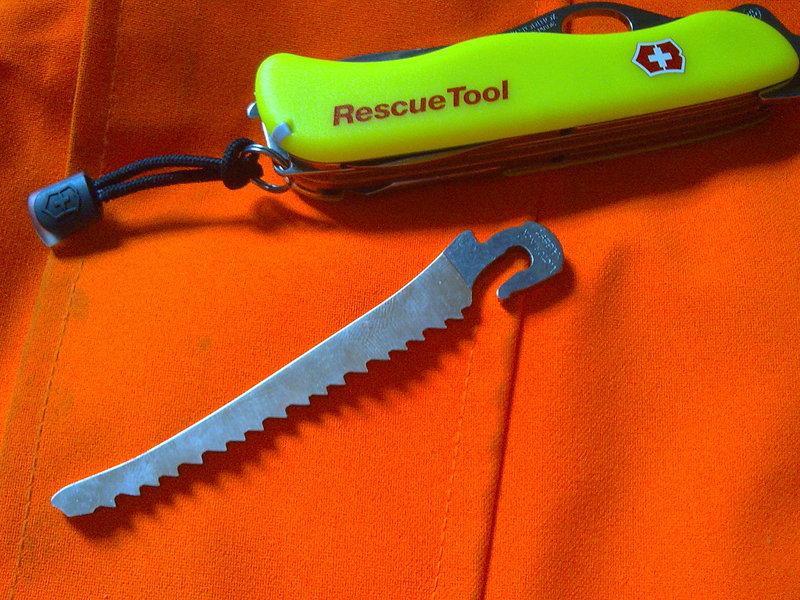 Main Blade: This model is fitted with Vics latest one hand opening blade which has a different thumbhole and vics tang stamp has now moved to the left side of the hole .Its serrated from the tip two thirds down with the remaining third near the tang  being plain. I When QE is implemented, the Fed buys financial assets and free-credits-report.com s banks with reserves. used to have a OHT with the old style blade and it didn’t open very smoothly , now this was either due to or a combination of both the blade having a black coating and a lot of sideways play which I was told was common on OHT . Well I can honestly say the Rescue tool doesn’t suffer any of these two problems. Its very smooth opening , far smoother then any of the Leathermans one handers I’ve tried and the new hole really does make it a pleasure to use . Isn’t funny how small changes can make such a difference. There is a small amount of up and down play when the blades deployed but this wont effect how the knife is used or in anyway lead to the lock failing . Talking of locks the liner lock is also of the newer version and is even easier to unlock now, 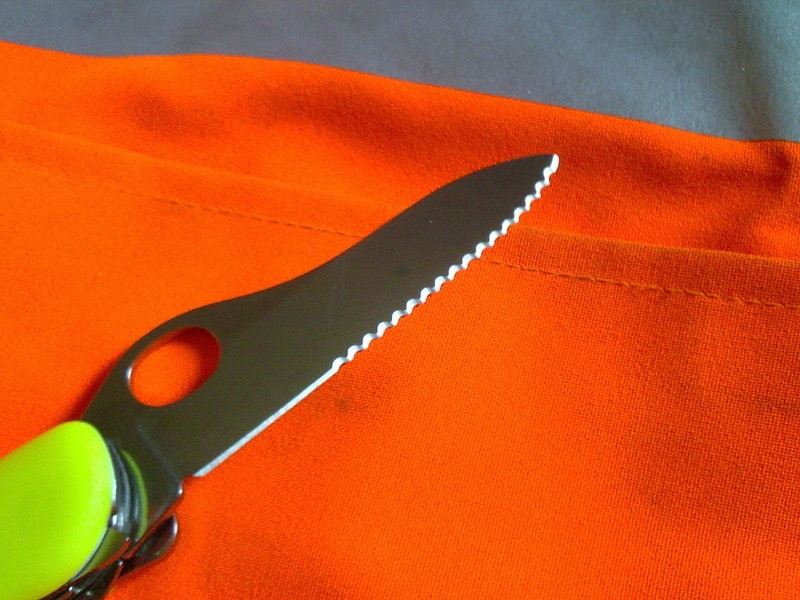 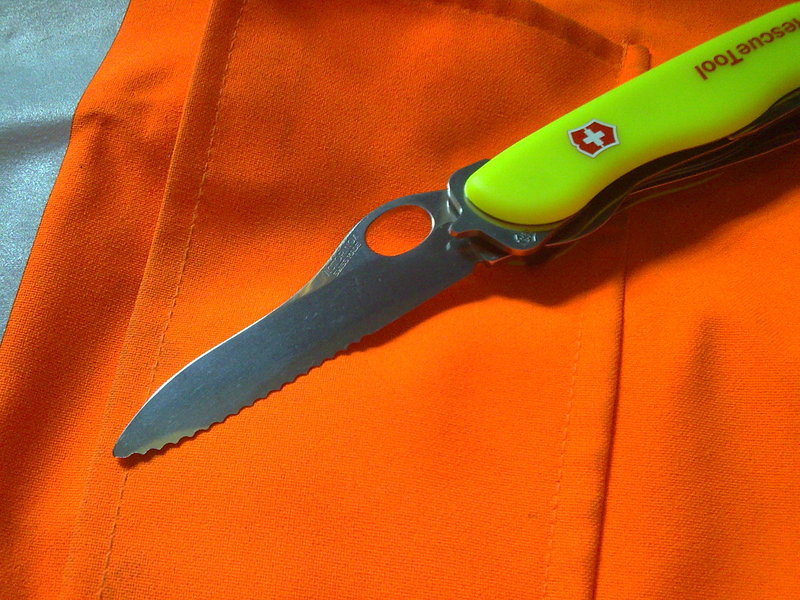 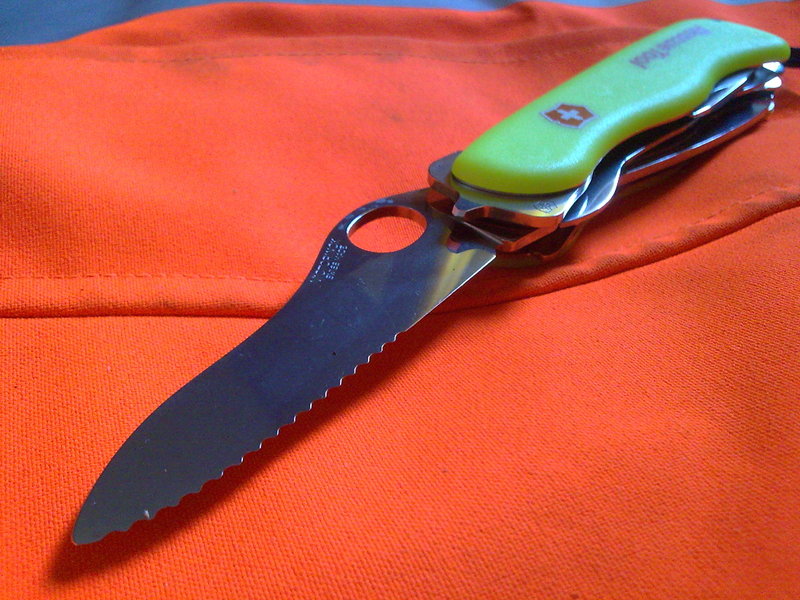 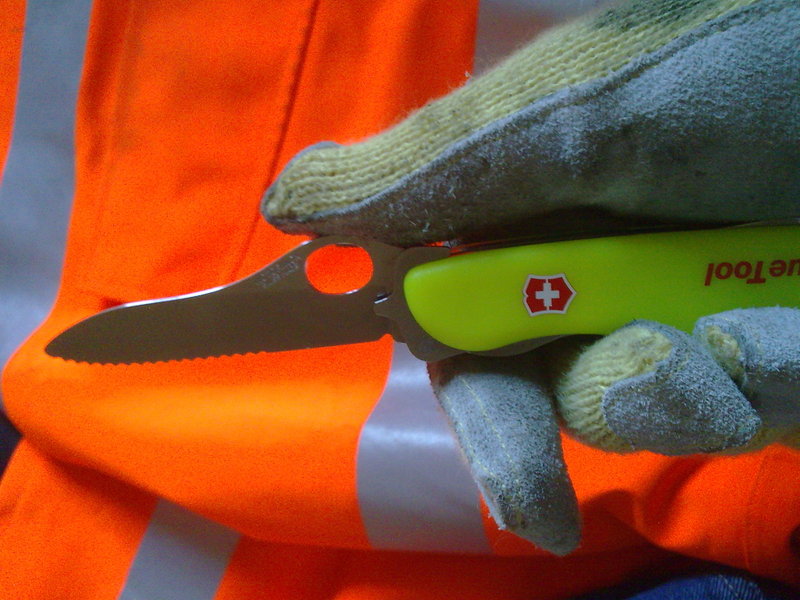 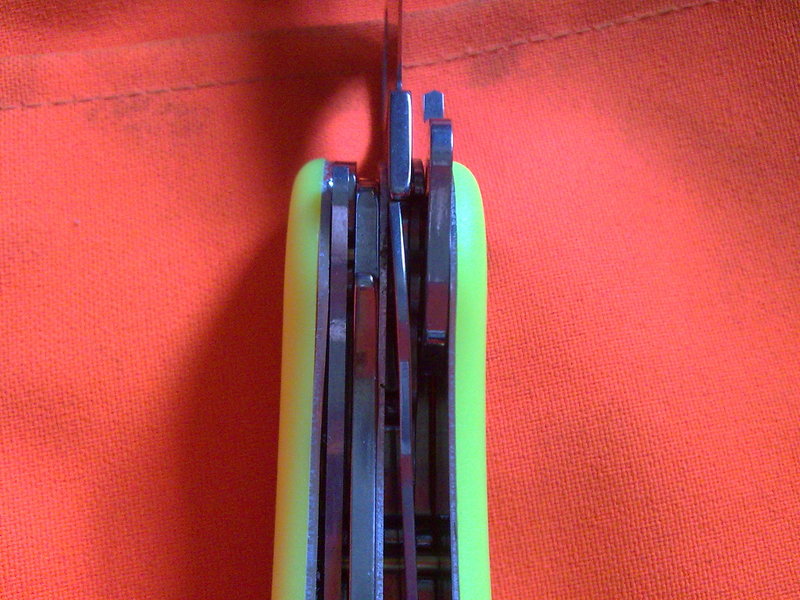 Screwdriver /prybar / bottle opener, this is a standard Trekker part and locks open with the same liner lock that’s used for the main blade. 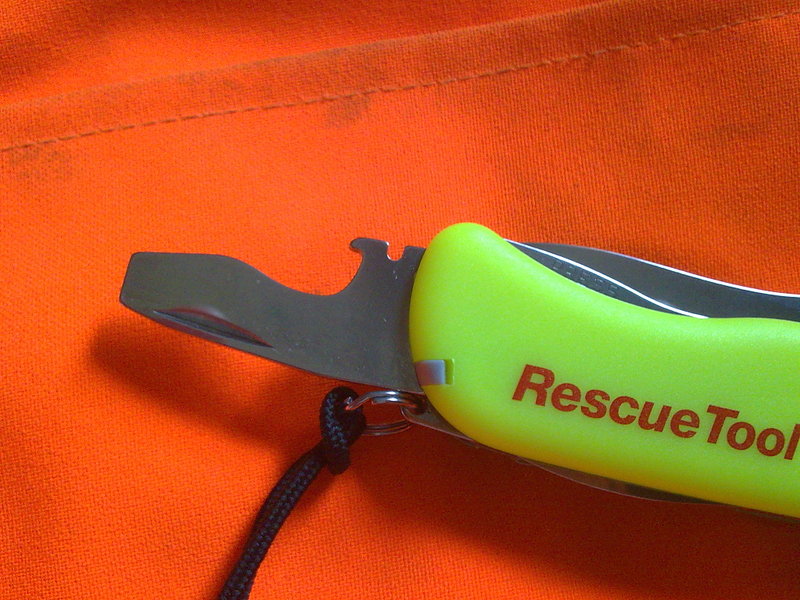 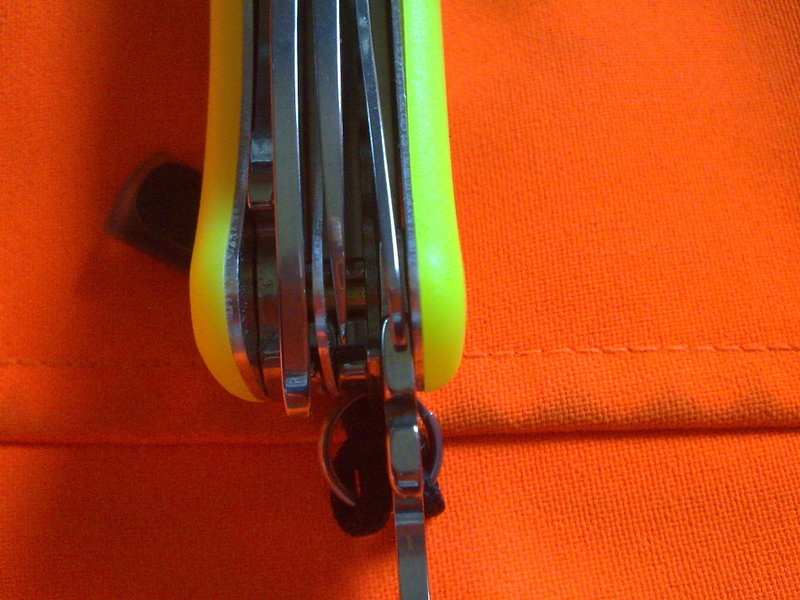 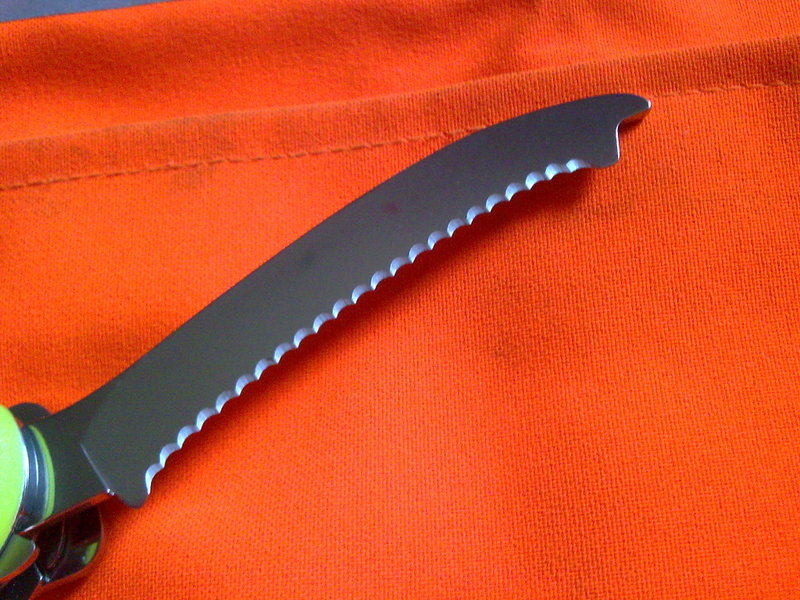 On the spine of the tool lives the awl and the Philips driver in the std 111mm configuration and both these tools have been around long enough to not need any introducing . For those who havnt had the pleasure yet they work very well and have done for years. 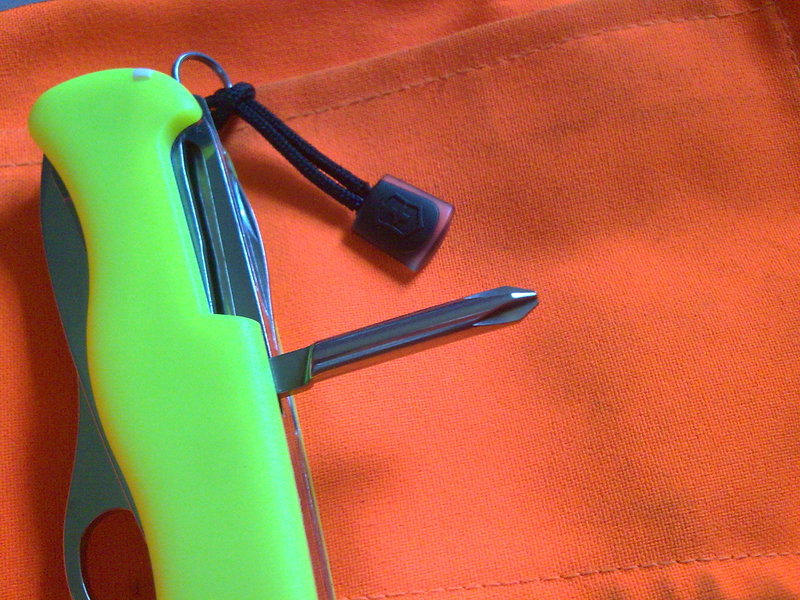 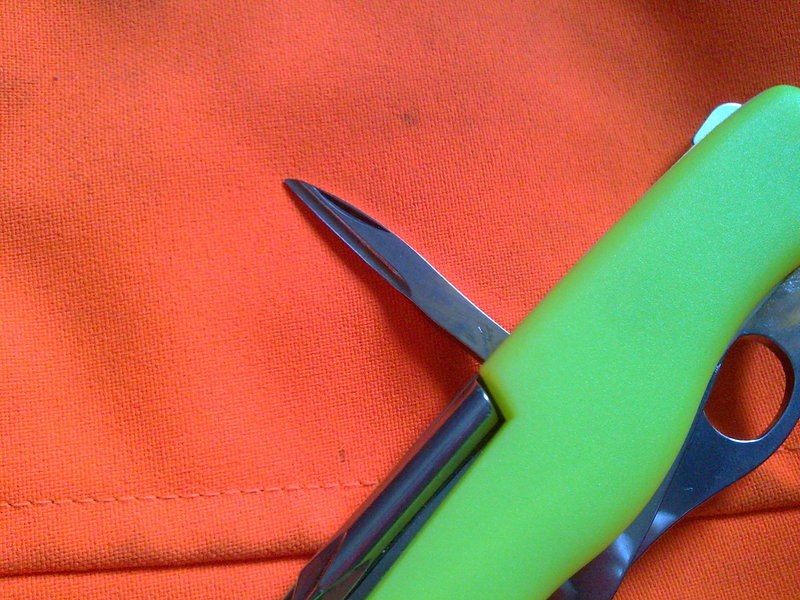 I was quite excited by these, why?  Because they glow in the dark. Is it just me that’s fascinated with things that glow in the dark ? At first I thought of it as a fun gimmick but it really does work and if dropped at night in the middle of a car crash then you can easily see it to pick it up again. A word of warning though , if its going to be left in a sheath then its not going to glow very brightly , it needs to be given access to light so it can charge up . A toothpick and tweezers also live in the scales in true SAK style  .

Apologies as the sheath for this went missing before I owned it but from what I can make out its just a brightly coloured version of the nylon Swisstool sheath.

I have been carrying it all day in my pocket of my jeans and it’s been fine but some folks are going to find it uncomfortable. It is a large heavy tool after all.

Well that’s about it apart from the little lanyard that’s included with a little Vic plastic/rubber shield on the end that helps to pull it from the sheath or pocket .

One worrying thing is about this tool is there is some fakes going about. Now I know there are loads of SAK knockoffs from china about but this is different, these have Victorinox stamped on them and to the untrained eye can easily be mistaken for the real thing. Here's a link to a SOSAK article giving details about the fakes . If you decide to buy one then please check this out to avoid getting a fake:  FAKE VICTORINOX RESCUE TOOL

This is a serious tool that Victorinox has put a lot of thought into, which has won those awards. It’s a bit large for some to have as an EDC tool but that’s missing the point. It’s a rescue tool and try as I may I can’t fault it.

If your still in doubt watch the video.
VIDEO ON THE VICTORINOX HOMEPAGE
Dunc