While the Cadet has always been a popular model amongst SOSAK members and other SAK users, there has always been an interest in special variants like the infamous Copper version.  While the copper model may still be an elusive dream for some, just about everyone can get their hands on some new offerings in a rainbow of new colors!

Well maybe saying “rainbow” is a little much, but there is a pretty good variety.  Cadets are now available in black, orange, red, green and gunmetal, which is kind of a blue-grey color.  The standard silver is of course still available.

For those not familiar with the Cadet model, it is an 84mm ALOX model which features a main blade, nail file, bottle opener (with integrated screwdriver and wire stripper), can opener (with integrated screwdriver), lanyard ring and an engraving plate.  At all of 47g (1.66oz) and 8mm (5/16”) the Cadet is light enough to keep on your keys, and makes a very elegant knife for the well prepared gentleman or suit wearing professional.  Engrave or monogram the plate on the back and you have a sure winner.

Pictured here is the black Cadet (bottom) and it's bigger brother, the black Pioneer (Top)
Unlike older colored ALOX models, the new colored Cadet models are marked with the standard shield like the other current generation ALOX models like the blue and red Farmers and red and black Pioneers.

As you can see, there's a big size difference between the Pioneer (left) and the Cadet (right)
With a color to suit almost any occasion, and an almost insignificant price tag, the new colored Cadet models are well worth looking into- any one of them, or even the whole set, which may help you get over the near impossibility of finding a Copper Cadet to add to your collection! 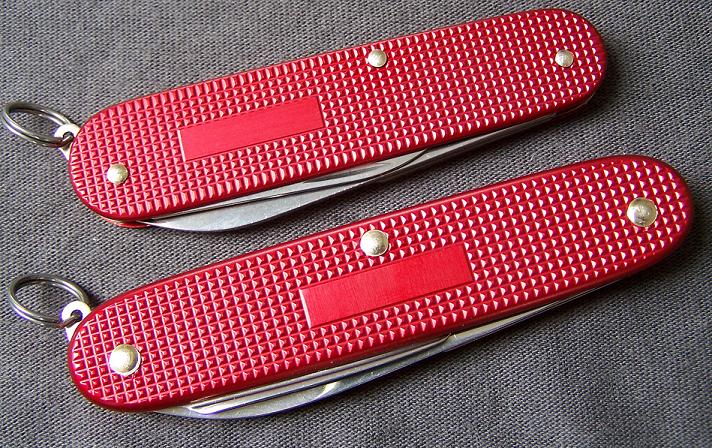