It’s been a couple of months since my last article talking about Scibeer Mods, so I’d contacted Bill about getting another one done.  They are strangely addictive, so consider yourself warned!

Since I am already quite familiar with Bills works in different styles- I have a scale and clip mod (OHT), a layer mod (YoMan) and a recreation mod (three layer Yeoman) I decided to challenge Bill with something different.  Of course I had no idea what I was going to get him to do so we put our heads together and came up with what we can really only call a Blue ALOX Huntsman, built from the ground up!

The Huntsman is one of my favourite all round EDC models, and blue ALOX is just too darned pretty to pass up.  Additionally it’s easy to spot in the woods when you put it down for a moment, so it was a natural choice.  We managed to work up a number of configurations until we came up with one we liked, which included almost all of the functions of the Huntsman in a four layer ALOX knife, but with no implements on the back.  Implements on the back would require cutting away at the ALOX scales, and that seemed like too much of a crime to me, so Bill made do with the front.

Typically the Huntsman model is four layers, with a large and small blade layer, scissors, wood saw and a can/bottle opener in the last layer, and a corkscrew, awl and (in post ‘91 models) a hook.  The Blue ALOX Huntsman sacrifices the hook, corkscrew and can opener, but replaces them with other features.

In the first layer of the ALOX Huntsman we have a main blade and Soldier style awl, which is preferred by many members, myself included.  The second layer has the scissors, the third houses the awl, and the fourth layer has an electrician’s blade and cap lifter.  The can opener could have been kept instead of the electrician’s blade, but I find a second blade very useful, and I always liked the configuration of the electrician’s blade.  It’s down swept point and curved wire stripper can be very handy for cutting rope or using a fire steel.  Also, the broad flat profile allows it to do different jobs than the main blade.

Lastly, knowing my fascination with bails (I prefer to EDC the Wenger SI rather than the Victorinox Soldier because of the bail), Bill added a nickel silver bail to the ALOX Huntsman for me.  I have to say, it is the perfect addition, both from aesthetic and functional points of view.  The shiny finish of it really sets off the blue ALOX scales, and provides a decent tie down point, which is something I insist on in an outdoors knife since I like to be on the water a lot. 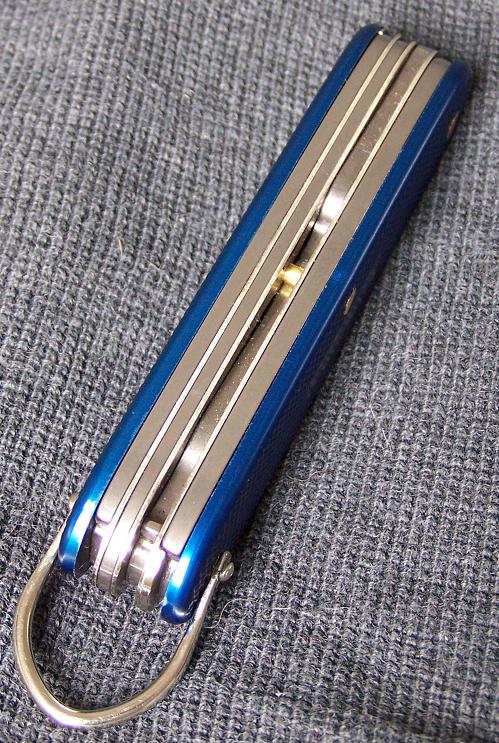 The only down side on this knife, and I really have to grasp at straws for this, is the hollow on the backside of the knife.  This is purely an aesthetic thing and doesn’t bother me a bit as I know Bill’s work is just as much function as it is art, and I plan to use this one!  On the back of the scissor layer Bill used a post 1991 backspring as the ALOX rivets are differently spaced that those on cellidor models.  Older scissor  backsprings won’t fit the ALOX rivet pattern, so this is a necessary evil.  Not that it’s a big deal mind you- like I said, I had to really dig to find something wrong, no matter how slight!

All in all, I have no doubt that this knife will not only survive use  in the world at large, it will excel at it!  This is all the more reason I can’t wait until the ice is off the lake and I can start my outdoor excursions again!